PORTUGAL : THE BEST AND WORST AT EUROVISION OVER THE YEARS

Some of you may recall that last year I published a best and worst at Eurovision article for every country that was taking part in Eurovision 2016 with the exception of Australia who were only competing for the second time. So this year I will publish one for Australia and Portugal who are returning. Also I will revisit each of the other countries to see if last years entry has entered the best or worst hall of fame. Now that the National Finals season is finished and all songs for Eurovision 2017 have been selected we now have 4 weeks before rehearsals start in Kiev. What better way to fill the time than to look back over the 61 years of Eurovision at some of the best and worst entries that countries have sent to the Eurovision stage. There were 43 countries going to Kiev to take part in the 2017 edition of our favourite musical extravaganza,  until 22nd March when Ukraine authorities placed a ban on the Russian entrant Yulia Samoylova entering Ukraine. So it looks most likely that Russia will not take part and you can see our article announcing the news here. So we continue our journey with Portugal who are returning after taking a year off last year. Portugal have never won the contest with their highest finish being 6th and have finished in the Top 10  eight more times.  They have failed to qualify for the Final eight times since Semi Finals were introduced. They have finished last in the Final three times and their worst finish has been 24th in the Final and 19th in the Semi Final. This has been achieved in 48 participations. You can check out the previous articles from last year in the best and worst series for Ireland HERE ,Spain HERE, Austria HERE, Bosnia & Herzegovina HERE, Iceland HERE, Belarus HERE, Denmark HERE, Georgia HERE, Germany HERE, Cyprus HERE, Finland HERE, Belgium HERE, Hungary HERE, Switzerland HERE, Ukraine HERE,Moldova HERE, Estonia HERE, Norway HERE, Italy HERE, Slovenia HERE,The Netherlands HERE, Armenia HERE, Azerbaijan HERE, San Marino HERE, Israel HERE,Albania HERE, Poland HERE,Serbia HERE,France HERE, Romania HERE, Russia HERE, Croatia HERE, Czech Republic HERE, Malta HERE., Macedonia HERE, Lithuania HERE, Latvia HERE,Sweden HERE,  United Kingdom HERE, Greece HERE, Bulgaria HERE  and Montenegro HERE. Also the articles for this year for Belarus HERE., Germany HERE., Hungary HERE., Austria HERE., Cyprus HERE. , Denmark HERE. , The Netherlands HERE. , Finland HERE. ,Poland HERE. , Australia HERE. , Romania HERE. , Belgium HERE. , Slovenia HERE. , Croatia HERE. , Montenegro HERE. , Ireland HERE. , Malta HERE. , Macedonia HERE. and Azerbaijan HERE. 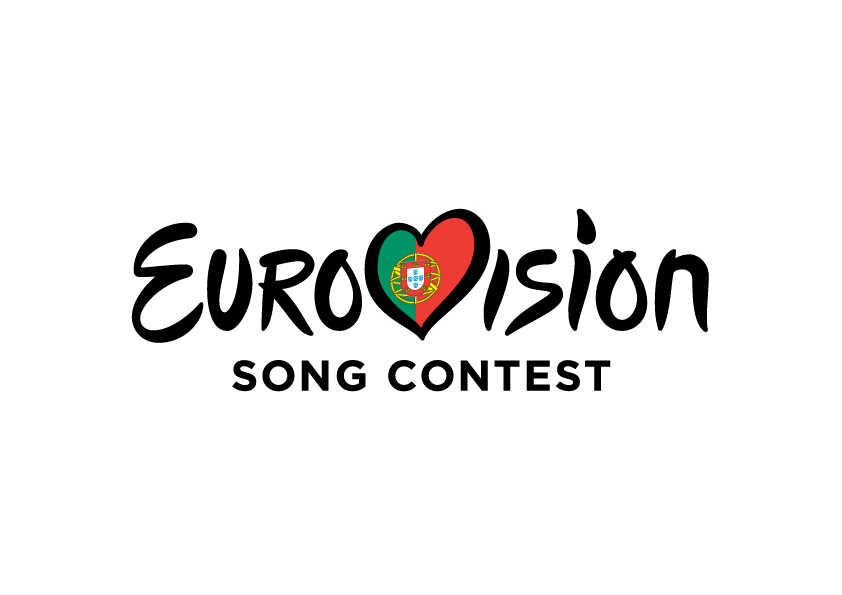 So this year Portugal are represented by  Salvador Sobral with the song ‘Amar Pelos Dois ‘. We will have to wait and see if it turns  out to be more of a best or  worst song for Portugal but the overall reaction is very positive so far. You can catch up on our recent article announcing the winner of the Final here.

So my selections for best and worst entries are based on a combination of actual results and personal taste. Now Portugal have a whopping 48 entries to choose from making the task very hard.

We  have to go back to 2008 to find our first song that is one of the best for Portugal. We were in Belgrade to see Vânia Fernandes  singing the song ‘Senhora do mar (Negras águas)’. 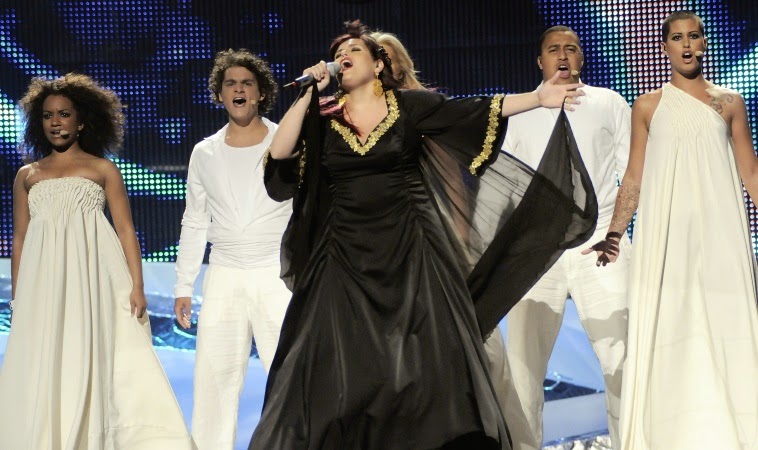 Now this is a great rousing ballad which translates as Lady of the sea (Dark waters). It was composed by Andrej Babić, who also wrote Croatia’s entry in 2003, “Više nisam tvoja” by Claudia Beni; Bosnia & Herzegovina’s in 2005, “Call Me” by Feminnem, and Slovenia’s in 2007, “Cvet z juga” by Alenka Gotar. Sung by Vânia who hails from the island of Madeira  and is known for her powerful stage presence, as well as her prominent and versatile voice. She went on to finish 2nd in the Semi Final with 120 points and then 13th in the Final with 69 points which is Portugal’s best result since 1998.

So moving along we look at one of the worst entries for Portugal. We were in Athens in 2006 to see Nonstop perform the song ‘Coisas de nada (Gonna Make You Dance) ‘. 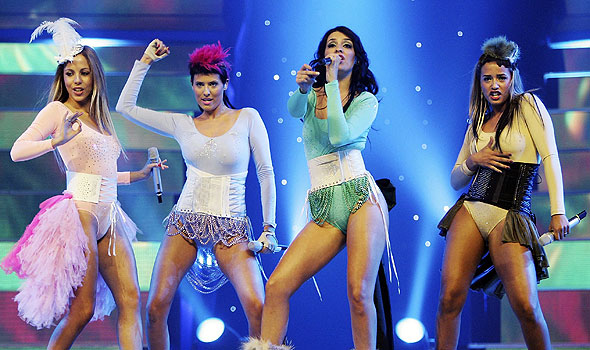 The song was performed with a mixture of English and Portuguese and is an up-tempo number, with the girls singing that their presence and love will brighten the days of their lovers. Considerable attention was drawn to the unusual clothing being worn by the members of the group. Nonstop were formed after a reality show in 2001 called Popstars ended up with 5 members of the band. Some early success with their debut album and single soon followed. In 2002 one of the band left leaving a quartet consisting of Andrea Soares, Ana Rita Reis, Kátia Moreira, and Liliana Almeida.  The song ended up with 26 points in 19th place in the Semi Final which is still Portugal’s worst showing in the competition.

So now we move back to look at another best of entry for Portugal . We were in Rome in 1991 and the performer was Dulce Pontes with the song ‘Lusitana paixão’.

Now the song is a ballad, with Dulce singing about the Fado music of her native country. She sings that on the surface, this is a style of very sad music, with a focus on “longing” and “love from the past”. As the song develops, though, she explains that this is a style of song which is perfect for her feelings, in that it “doesn’t make me regret”. Dulce is a Portuguese songwriter and singer who performs in many musical styles, including pop, folk, and classical music. Her songs contributed to the 1990s revival of Portuguese urban folk music called Fado. The song finished in 8th place with 62 points and is Portugal’s 4th best result to date.

Our next song that has to be considered one of the worst was in the year 2011 and we were in Dusseldorf to witness Homens da Luta singing ‘A luta é alegria’. 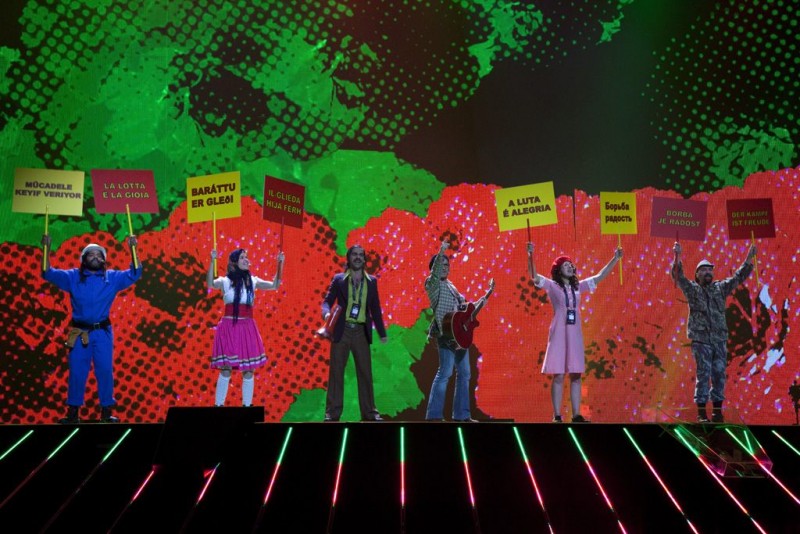 This is a song that incorporates a folk music style. The song refers to the struggle that the people must endure to have their voices heard, by shouting and celebrating on the street. It calls for the union of the people, and to sing against reaction. Homens da Luta (Men of the Struggle) is a Portuguese improvisational comedy and musical street performance group consisting of brothers Vasco Duarte (Falâncio) and Nuno Duarte “Jel” (Neto). Their songs are a parody of songs sung during the period after the 1974 Carnation Revolution and the characters played are caricatures of the revolutionary singers of the time. The song came 18th in the Semi Final with 22 points and therefore failed to qualify for the Final. It is still the 2nd worst result for Portugal.

So onto our next song that was one of Portugal’s best. It was in 1982 and Harrogate was witness to seeing Doce  perform with the song ‘Bem Bom’. 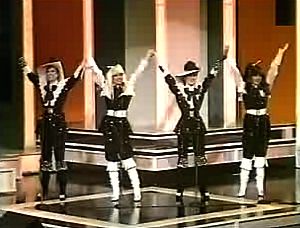 Now starting with the song Bem Bom (Very Good) is an up-tempo number inspired by Portuguese folk music, describing the beginning of a relationship from the perspective of a woman. All group members were strikingly dressed in musketeers outfits. The members were Laura Diogo, Lena Coelho, Fátima Padinha and Teresa Miguel.Fatima and Teresa also competed for Portugal in 1978 as part of the group Gemini with ‘Dai Li Dou’. The song fished in 13th place with 32 points.

We now arrive at another song for Portugal and it’s another of the worst ones. In 2005 we saw 2B in Kiev with the song ‘Amar’. 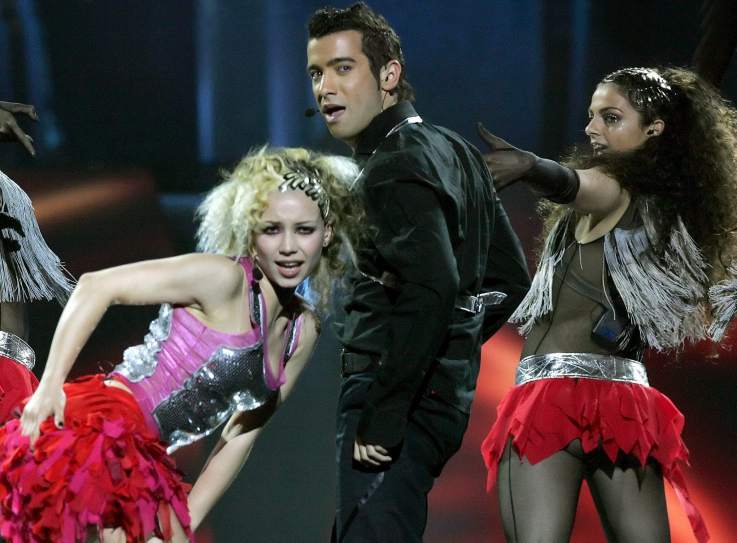 The song is an up-tempo number, with the duo singing about the great power of love. The band was formed by Luciana Abreu and Rui Drummond. They had come together exclusively to compete at Eurovision and after their lack of success said they would most unlikely continue together. Luciana went on to become a hairdresser with her own salon then became an actress. She also tried for Portugal again herself coming 3rd in the Final. Rui disappeared into obscurity. The song managed to gain 17th place in the Semi Final with 51 points which is Portugal’s 3rd worst result to date.

So I have mentioned 3 best of songs above but also have to mention the song that was the entry in 1996 as also being one of the best too. Lúcia Moniz was in Oslo to sing the song ‘O meu coração não tem cor’.

It was a song was a moderately up tempo number. Moniz sings in praise of the Portuguese language and Lusophone culture in general, describing the result of the former Portuguese Empire as a “tricontinental party” in which “What’s far away is still close in songs”. Lucia has had 4 top selling albums in her music career and also went on to become an accomplished actress too. Her most notable achievement was landing a role in the critically acclaimed film ‘Love Actually’ where she played the role of Portuguese speaker Aurelia. She recently reprised her role in March 2017 on British TV in Red Nose Day Actually. The song gave Portugal its best ever result to date finishing in 6th place with 92 points.

In addition to the previously mentioned best songs for Portugal I can not let the following songs be forgotten as they were also really great too. In 1998 in Birmingham I was witness to my first live contest and loved Alma Lusa with her song ‘Se eu te pudesse abraçar’.

Finally we go all the way back to 1972 when we were in my home city of Edinburgh at The Usher Hall to witness Carlos Mendes singing the great song ‘A Festa Da Vida’.

So there we have it folks, my little delve into Portuguese Eurovision history and some of the best and worst moments over the years. Do you agree with all or even any of my choices? Feel free to comment below.