We just popped in for a hit-and-run interview with Swedish homeboy Frans, and he told us about what he’s got planned for Monday morning, his chances of winning, and his love of Crystal Palace. Find out ten things you didn’t know about Frans here… For more info […]

Those with sharp eyes towards the end of last evening’s first semi-final may have noted Iveta Mukuchyan from Armenia waving an unfamiliar flag. The Armenian flag with a white chevron on it was in fact the banner of the disputed Nagorno-Karabakh region – and its brief flash on a the screen during the […]

Eurovision Ireland on the Red Carpet

So last night saw the official opening of Eurovision, and the stars of 42 nations strutted the red carpet in their best shoes and frocks outside the palatial Euroclub tent before heading off to a swanky do at the City Hall in front of loads of dignitaries and […]

BELGIUM: We speak to Laura Tesoro at Eurovision 2016 – The Interview

Eurovision Ireland caught up with the lovely Laura Tesoro in the press centre in Stockholm this afternoon. She tells us all about her life in music and what she hopes comes from her performance at Eurovision. Laura Tesoro performs for Belgium in the second semi-final on Thursday 12 May. Watch Laura’s national final […]

BELARUS: We speak to Ivan at Eurovision 2016 – The Interview

Eurovision Ireland caught up with the tall and gracious Ivan in the press centre in Stockholm this afternoon. He gives us his best grooming tips for men, speaks of his love for old school classic rock, and hints about how much fun it is to be naked with wolves. […]

Montenegro: We speak to Highway at Eurovision 2016 – The Interview

Eurovision Ireland caught up with Highway in the press centre in Stockholm this afternoon, and what a lovely bunch they were. They tell us about their favourite bands, being on X Factor and being really, really tall. Highway are performing for Montenegro in the first semi-final on Tuesday 10 May. Check out our […]

RUSSIA: First live performance of You Are The Only One offers few clues

This year’s hotly-tipped Russian artist Sergey Lazarev made his first recorded live performance of his Eurovision hit You Are The Only One last night (read our full story on the song’s original reveal here). But what have we learned that might help us determine if he’s bound for the title? […]

How Europe filled in the bit where we waited for the votes… You know that bit in every national final where they have to verify and ratify all the votes (or in some case, give the president a quick phone call)? You know, the one they fill with […] 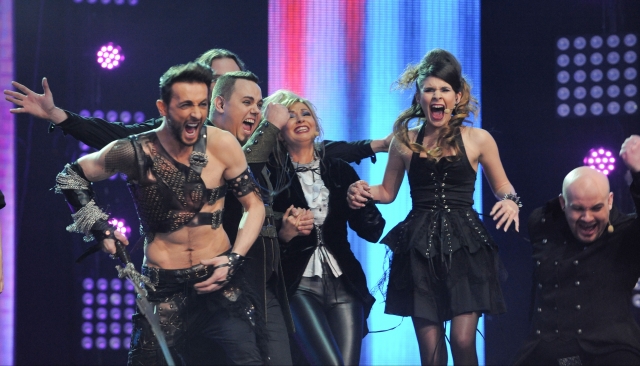 ROMANIA: Ovidiu Anton’s ‘Moment Of Silence’ speaks out against corruption

When Ovidiu Anton won the Romanian national selection final last Sunday, many were surprised by the margin of his victory. While he gave what was arguably the most memorable performance on the night in a field of unremarkable contenders, this everyman rock singer had made our previous attempts […]