GREECE: THE BEST AND WORST AT EUROVISION OVER THE YEARS

Now that the National Finals season is finished and all songs for Eurovision 2016 have been selected we now have a period of less than a day where we wait for the rehearsals to begin in Stockholm. What better way to fill the time than to look back over the 60 years of Eurovision at some of the best and worst entries that countries have sent to the Eurovision stage. There are 43 countries going to Stockholm to take part in the 2016 edition of our favourite musical extravaganza and we continue our journey with Greece who have won the contest once and finished third three times. They have also finished in the top 10 fourteen times. They have never come last in the Final and their worst finish has been 20th on two occasions. They have always qualified from the Semi Finals. This has all been achieved in  36 participations. You can check out the previous articles in the best and worst series for Ireland HERE ,Spain HERE, Austria HERE, Bosnia & Herzegovina HERE, Iceland HERE, Belarus HERE, Denmark HERE, Georgia HERE, Germany HERE, Cyprus HERE, Finland HERE, Belgium HERE, Hungary HERE, Switzerland HERE, Ukraine HERE,Moldova HERE, Estonia HERE, Norway HERE, Italy HERE, Slovenia HERE,The Netherlands HERE, Armenia HERE, Azerbaijan HERE, San Marino HERE, Israel HERE,Albania HERE, Poland HERE,Serbia HERE,France HERE, Romania HERE, Russia HERE, Croatia HERE, Czech Republic HERE, Malta HERE., Macedonia HERE, Lithuania HERE, Latvia HERE, Sweden HERE and United Kingdom HERE . 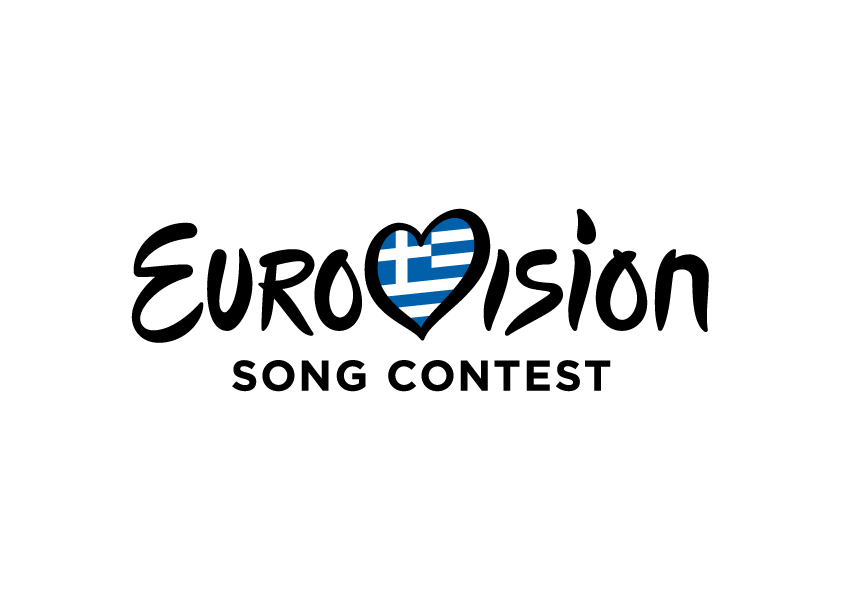 So this year Greece are represented by Argo with the song ‘Utopian Land ‘. We will have to wait and see if it turns  out to be more of a best or  worst song for Greece but the overall reaction is fairly mixed so far.

So my selections for best and worst entries are based on a combination of actual results and personal taste. Now Greece have thirty six entries to choose from making the task very difficult. There are some  great songs from Greece that have deserved better results over the years but I am struggling to pick out the three best. So I will highlight more good Greek entries after I have picked three good and bad ones.

We  have to go back twelve years to find our first song that is one of the best for the Greece. The year was 2005 and we were in Kiev to see Helena Paparizou  singing the song ‘My Number one’. 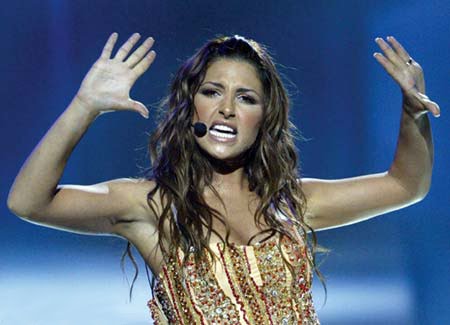 Now this was a cracker of an entry from Greece. Helena had been to Eurovision before and come 3rd as part of the group Antique in 2001. Helena was born in Sweden to Greek parents and has spent most of her life in Sweden. The song is notable for casting elements of traditional Greek music in a contemporary dance music setting: its arrangement includes bouzoukis and a solo featuring a Cretan lyra The song’s lyrics describe the singer’s appreciation for her lover who is lauded as “my number one” and “the only treasure I’ll ever have”. During the performance, Paparizou did a stage show of the song. Some of the best remembered visuals from the show include her dancing a traditional Greek Pontian dance, the 4 dancers making the shape on the number 1 of the floor (showed from aerial camera) and her playing an imaginary lyra while her dancers pick her up. The song went on to win the Final with 230 points.

So moving along we look at one of the worst entries for Greece. We were in Riga in 2003 to see Mando  perform the song ‘Never Let You Go ‘. 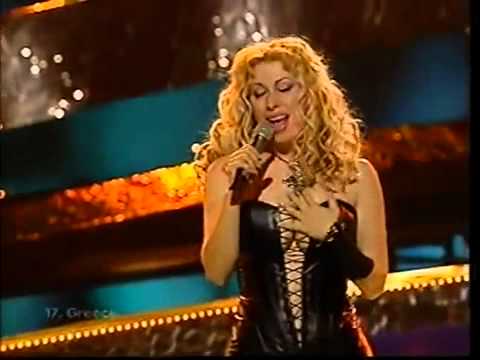 Now the song was sung entirely in English which was the first time a Greek entry had no Greek lyrics in it. Mando had a hand in writing the music herself. The song is a dramatic ballad, with the singer telling her lover all the things she would do for him, but emphasising that she would “never let you go”. For her Eurovision appearance, Mando wore an unusual navy blue gown, with a very tight lace-up bodice. Mando had tried to go to Eurovision in 1989 but narrowly missed out then in a controversial vote. She is a popular singer in Greece singing mainly pop rock and disco. The song finished in 17th place in the Final with 25 points.

So now we move back to look at another best of entry for Greece. We were in Istanbul in 2004 and the performer was Sakis Rouvas with the song ‘Shake It’. 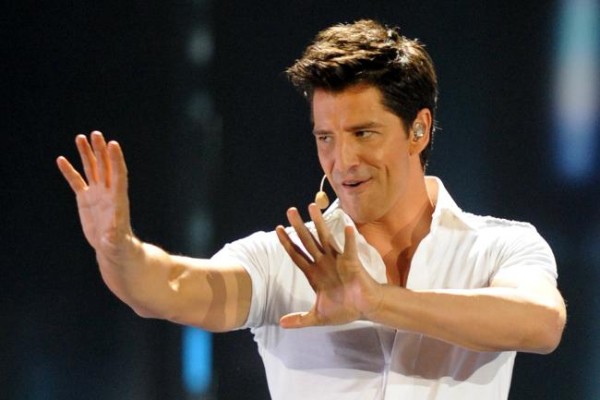 Now the song was in a dance pop Greek style with Rouvas telling his lover that “I would trade my life for a night with you” and asking the lover to “shake it” for him. The music – by Nikos Terzis – also features some traditional Greek instrumentation as well as the heavy dance beats increasingly prominent at the Contest. The performance was similarly sexualised, with Rouvas beginning by dancing with two girls wearing suits. As he sang the line “my world’s on fire”, he pulled red scarves from the trousers of his backing dancers. Later, he removed the suits from his dancers, revealing skimpy gold costumes. They later returned the favour by tearing his white jacket from him at the start of the final chorus, leaving him wearing a singlet and jeans. Live recordings of the performance feature loud cheers from the crowd as well as audible panting from Rouvas at the end of his athletic dance routine. Sakis started a very successful music career in the early 90s after being a decent pole vaulter also. He also went on to represent his country again in 2009 and also co hosted the Eurovision Song Contest in 2006 when Greece hosted it. His song finished in 3rd place in the Semi Final then again in 3rd place in the Final with 252 points.

Our next song that has to be considered one of the worst was in the year 1990 and we were in Zagreb to witness Christos Callow & Wave  singing ‘Horis Skopo’. 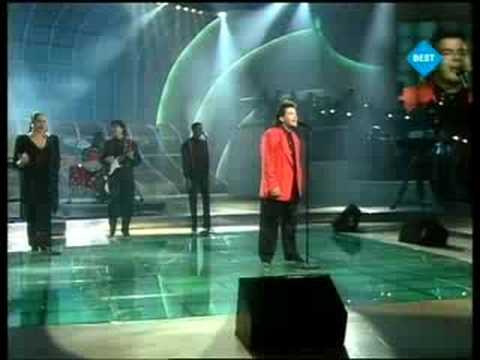 This was a song that was a ballad, with Callow singing about his desire to be with his lover. He sings that she tells him that she loves him and then “you go away without a purpose”, which causes him considerable heartache. He was also a musical actor as well as a singer in Greece. His song was placed 19th in the Final with 11 points.

So onto our next song that was one of Greece’s best. It was in 2001 and Copenhagen was witness to seeing Antique perform with the song ‘(I Would) Die For You’. 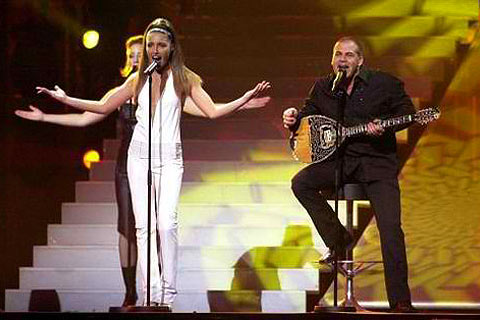 Now starting with the song it was performed in a mixture of Greek and English and was the first time its entry was not entirely in Greek. It was an up-tempo number inspired in part by Greek folk music. Lyrically, it deals with the realization on the part of the singers, who sing in unison for most of the performance, that their love is all that matters. They tell each other that “I would die for you/Look into my eyes and see it’s true”. The contest performance was a relatively static affair, with both singers as well as the backing vocalists standing in front of microphones to sing. Elena Paparizou, however, wore a tight white outfit, standing out against the black-clad backing singers and her duet partner. While the contest had by this point embraced pre-recorded music, Nikos Panagiotidis performed with the traditional Greek instrument bouzouki throughout. Of course we saw Elena return to Eurovision as Helena in 2005. The song went on to finish 3rd with 147 points which was Greece’s best result at that time.

We now arrive at another song for the Greece and it’s another of the worst ones. In 2002 we saw Michalis Rakintzis in Tallinn with the song ‘S.A.G.A.P.O.’. 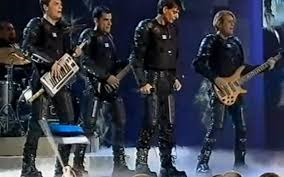 It was a song that was sung in English and the song deals with the surest way to cheer Rakintzis up, for his lover to tell him how she feels about him. This is described as being “the password” throughout the lyrics. Michalis and his backing singers were all dressed in black, robotic outfits, for their Eurovision appearance. The song ended up in 17th place with 27 points.

1992 Kleopatra with the song ‘Olou tou kosmou i Elpida’.

So there we have it folks, my little delve into Greek Eurovision history and some of the best and worst moments over the years. Do you agree with all or even any of my choices? Feel free to comment below.