SLOVENIA :REVISITED THE BEST AND WORST AT EUROVISION

Some of you may recall that last year I published a best and worst at Eurovision article for every country that was taking part in Eurovision 2016 with the exception of Australia who were only competing for the second time. So this year I will publish one for Australia and Portugal who are returning. Also I will revisit each of the other countries to see if last years entry has entered the best or worst hall of fame. Now that the National Finals season is finished and all songs for Eurovision 2017 have been selected we now have 5 weeks where we wait for the rehearsals to begin in Kiev. What better way to fill the time than to look back over the 61 years of Eurovision at some of the best and worst entries that countries have sent to the Eurovision stage. There were 43 countries going to Kiev to take part in the 2017 edition of our favourite musical extravaganza,  until 22nd March when Ukraine authorities placed a ban on the Russian entrant Yulia Samoylova entering Ukraine. So it looks most likely that Russia will not take part and you can see our article announcing the news here.  So we continue our journey with Slovenia who never won the contest  and finished in the top 10 three times with 7th being the best placing on two occasions. They have finished last once in a Semi Final.  This has been achieved in 22 participations. You can check out the previous articles from last year in the best and worst series for Ireland HERE ,Spain HERE, Austria HERE, Bosnia & Herzegovina HERE, Iceland HERE, Belarus HERE, Denmark HERE, Georgia HERE, Germany HERE, Cyprus HERE, Finland HERE, Belgium HERE, Hungary HERE, Switzerland HERE, Ukraine HERE, Moldova HERE, Estonia HERE, Norway HERE, Italy HERE, Slovenia HERE, The Netherlands HERE, Armenia HERE, Azerbaijan HERE, San Marino HERE, Israel HERE, Albania HERE, Poland HERE, Serbia HERE, France HERE, Romania HERE, Russia HERE, Croatia HERE, Czech Republic HERE, Malta HERE., Macedonia HERE, Lithuania HERE, Latvia HERE, Sweden HERE,  United Kingdom HERE, Greece HERE, Bulgaria HERE  and Montenegro HERE. Also the articles for this year for Belarus HERE., Germany HERE., Hungary HERE., Austria HERE., Cyprus HERE. , Denmark HERE. , The Netherlands HERE. , Finland HERE. ,Poland HERE. , Australia HERE. , Romania HERE. and Belgium HERE. 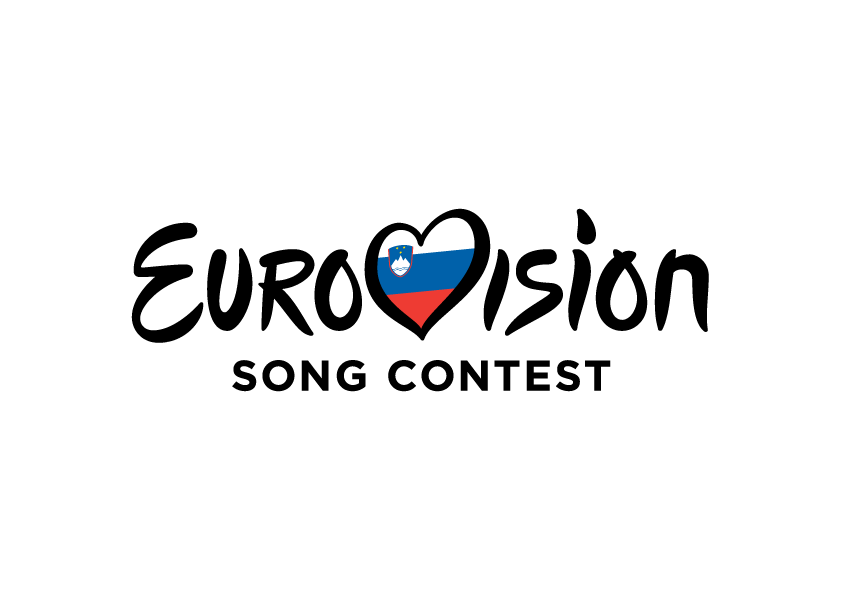 So this year Slovenia are represented by Omar Naber with the song ‘On My Way’. We will have to wait and see if it turns  out to be more of a best or  worst song for Slovenia but the overall reaction is fairly mixed so far. You can catch up on our recent article announcing his win in the Final here.

So last year Slovenia were represented by ManuElla with the song ‘Blue and Red’.  So how did ManuElla do in Stockholm? Well she failed to qualify for the Final after coming 14th in her Semi Final. So clearly not one of the best or in fact worst entries for Slovenia so I  am unable to welcome her into the hall of fame.

So my selections for best and worst entries are based on a combination of actual results and personal taste. Now Slovenia have twenty two entries to choose from making the task a bit easier.

We do not have to go very far back in time to find our first song that is one of the best for Slovenia. The year was 2015 and we were in Vienna to see Maraaya singing the song ‘Here For You’.

Now Maraaya are an indie pop duo consisting of Marjetka and Raay Vovk who are married to each other. Both had a hand in composing the last two entries for Slovenia in Junior Eurovision and Raay wrote the Slovene entry in 2014 for Eurovision. The performance was noted for Marjetka wearing headphones and having a dancer playing air violin. It was a popular song among fans and did well in the Semi Final finishing in 5th and then in the Final it ended up 14th with 39 points.

Moving along we look at one of the worst entries for Slovenia. We were in Oslo in 1996 to see Regina perform the song ‘Dan najlepših sanj’.

Now the song was a ballad that I just found to be a bit dull. Regina was far from dull though standing out in a bright lime green dress. Regina has entered the EMA contest in Slovenia eight times and as recently as 2016 but this was the only time she won it and earn the right to go to Eurovision. The song ended up in 21st place with 16 points.

So now we move back to look at another best of entry for Slovenia. We were in Kiev in 2005 and the performer was Omar Naber with the song ‘Stop’. 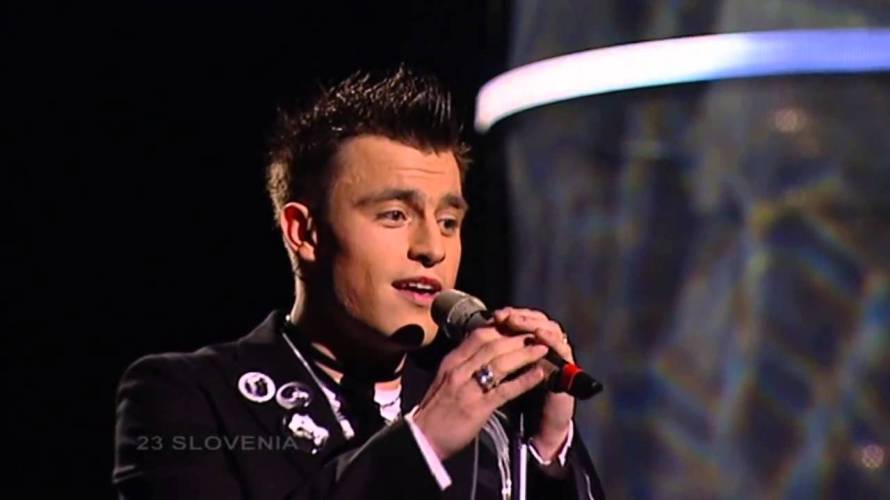 Now this was a cracking song and performance from Omar who was a powerful singer. He wrote the song himself and has tried to get to Eurovision four more times for Slovenia and of course has succeeded in returning back to Kiev this year. Despite the English song title it was performed in Slovenian. In a bloodbath of a Semi Final consisting of 25 entries it failed to qualify for the Final ending up 12th with 69 points.

Our next song that has to be considered one of the worst for Slovenia was in the year 2004 and we were in Istanbul to Platin with the song  ‘Stay Forever’. 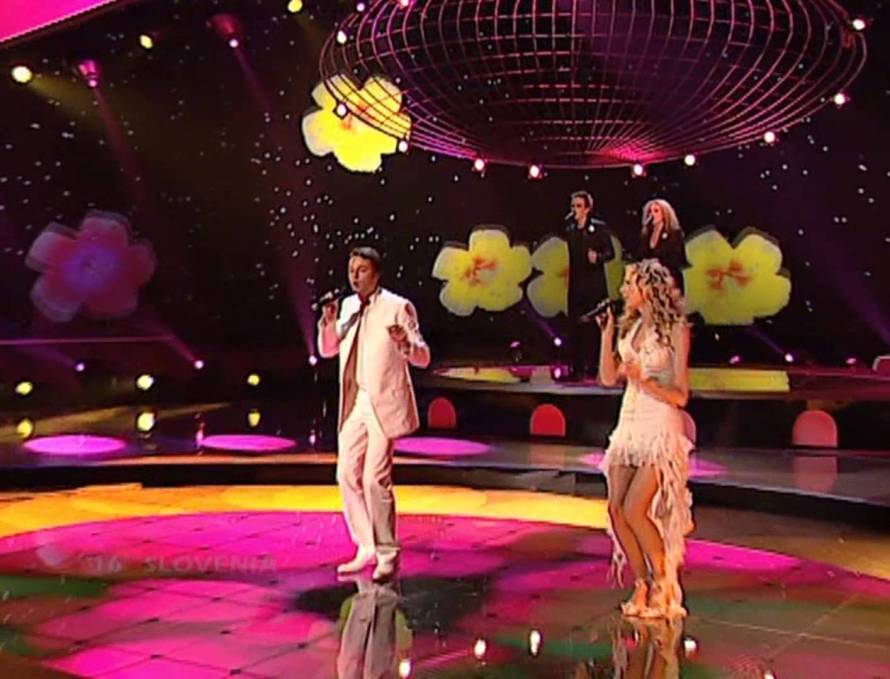 There is no doubt that Platin had certainly plenty heartfelt sentiment in their song. They are after all married and Simon and Diana gave a decent performance. But the song failed to impress the voters and came a lowly 21st place with only 5 points.

So onto our last song that was one of Slovenia’s best. It was in 2001 and Copenhagen saw Nuša Derenda with the song ‘Energy’.

Now starting with the song it was a high energy disco number. Derenda appeared dressed in black and yellow leather. She was accompanied by two pianists dressed in red and black, who faced each other on stage. At the climax of the song, two male dancers came onto the stage and lifted Nusa Derenda into the air. During the final chorus, the men danced around the stage behind her. Nusa has appeared in EMA in Slovenia seven times in total also narrowly missing on another chance at Eurovision in 2003. The song gave Slovenia its joint highest placing of 7th with 70 points.

We now arrive at the last song for Slovenia and it’s another of the worst. In 2010 we saw Ansambel Žlindra and Kalamari represent their country in Oslo with the song ‘Narodnozabavni rock’.

It was a song that had a style all unto itself , a kind of turbofolk pop. The Promo CD had 9 versions of the song on it which was fantastic if you liked the song. Unfortunately I did not. Ansambel Žlindra were a musical group who were accompanied on stage by Kalamari yet another musical group. The song failed to qualify for the Final ending up in 16th place in the Semi Final with only 6 points.

So there we have it folks, my little delve into Slovenian Eurovision history and some of the best and worst moments over the years. Do you agree with all or even any of my choices? Feel free to comment below.