#UNITED KINGDOM : Live blog of the National Final – JOIN US from 20:30CET

UK– Join us today at 20:30 CET for our LIVE rolling blog of the UK National Final 2017( Eurovision You Decide) where 6 acts will compete for a place in Kiev and go on to represent their country in Eurovision 2017. The Final is being beamed live from the Eventim Apollo in Hammersmith, London.

You can watch the show live here via bbc.co.uk or here via the BBC website at 20:30 CET and it is also on BBC2 if you can get that. Just refresh our page here to get the views, comments and points of view from Andrew Main who you will know from previous musings  here at Eurovision Ireland and his sparkling charm and witty repartee should keep you entertained… or bored to hell, who knows!!

Also we have some of the Eurovision Ireland team attending the show. Both James and Richard are there and will try to do some stuff for our PERISCOPE. Also they will attend the Press conference after the show.

You can also see Eurovision Ireland’s team review of all the songs in tonight’s Final here.

The 6 Acts tonight are :

1. Olivia Garcia – Freedom Hearts2. Holly Brewer – I Wish I Loved You More3. Lucie Jones – Never Give Up On You4. Danyl Johnson – Light Up The World5. Salena Mastroianni – I Don’t Wanna Fight6. Nate Simpson – What Are We Made Of

The results will be decided by a mix of public votes and a music professional jury. The show will be presented by Mel Giedroyc and there will be special guests including Alexander Rybak and The Vamps. Soon we will find out who will succeed in taking on the UK golden ticket from Joe and Jake who reached finished 24th in the Grand Final last year.

So sit back and get ready for Andrew to give you his spin on tonight’s offerings from the UK – JUST REFRESH THE PAGE for the up to date comments – at your own risk!

Welcome to the UK Final You Decide to pick our song to go to Eurovision. Mel begins in amongst the crowd then gets carried onto the stage by two hunky guys. Now she introduces the show on stage. Then brings on the competing artists. Before we start we have our first guest the one and only Alexander Rybak singing his winning song Fairytale. Mel now is introducing the Jury to us as well as telling us about the voting will work. Holly is up first tonight. Her opening vocals are a bit shaky, nerves perhaps? But she does grow into it and settles down before we hit the chorus. Yes I do like this song and think it would do well at Eurovision under normal circumstances. A definite grower I think and am sure it would not disgrace us in Kyiv. CC loved the song and the vocals. Sophie loved it too and that it was a good power ballad, Tonelli was wowing about it too.

The opening vocals are awful, the backing singers were so out of tune.  Danyl then comes on and his vocals are better but some shaky moments too. This is a good uptempo song which does get better as it progresses. The backing guys and Danyl interact with some dance moves too. The build at the end is also poor vocally. Its a great song but the performance was not. Bruno thought it good but could go up a notch more. CC liked the song too and Sophie though he was having lots of fun.

Now we have the song written partly by Eurovision winner Emmilie De Forest. A lovely smooth ballad and Lucie treads the board in Musical Theatre and it certainly shows. The vocals are flawless and very confident. I really do like this a lot and would love to see Lucie go to Kyiv. Great reaction from the crowd at the end.

Sophie absolutely loved it and thought it powerful. Bruno found the simpleness overpowering too, he said it was magical. CC found her voice incredible like a superstar.

Sixteen years old and she isn’t showing any nerves. A very confident performance and nice steady vocal. A good ballad with some great vibes to it. This is probably good enough for Eurovision too and is one of the better overall performances. 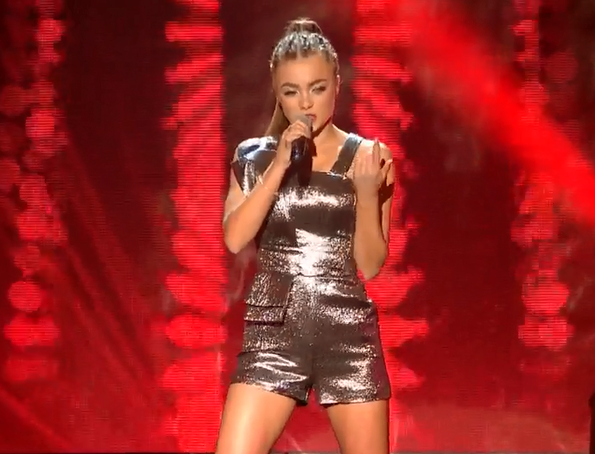 Sophie found her good but didn’t think the song was the best. Bruno is just mental and though it was rocky and very Gwen Stefani. CC was amazed by the huge voice.

Nate up next with a gentle sounding ballad. Vocally very assured and steady. It then breaks out into a bit of a build. It for me is too much of a musical number for the theatre. It is neither a belter or a smouldering song. Bland is not what I would say as its better than bland but I think it would get lost at Eurovision. 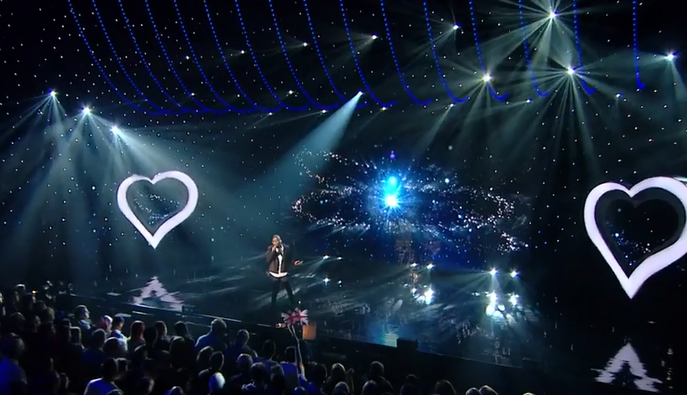 CC loved the vocal and was immersed in the performance. Sophie thought it reminded her of Conchita. Bruno though he was singing directly to him and found the voice rich and clear.

A bit of shaky start from Salena It is quite weak for the first 30 seconds but when it kicks into the uptempo beat it does get better. The vocals are still a bit shaky and unconvincing. A shame because I like the fell of this song and with a stronger performance could do well at Eurovision.

Bruno found it quite energetic. CC thought it was ok. Sophie thought it went down a treat.

Mel now opens the voting and explains how the votes will work. Then we get a run through of all the songs again with voting numbers.

Who would I want to win? Well if it was down to me I would send either Lucie Jones or Olivia Garcia to Kyiv as both were superb both in performance and vocally and if not them then I would send Holly Brewer as my third place choice.

We get a VT with students watching previous Eurovision songs and getting their reactions. All very Gogglebox but fun nonetheless. Now its our next guest we have The Vamps on stage singing their song All Night.

Six minutes to go in the voting after The Vamps and we get another recap. Now we get a VT about why Australia is in Eurovision? An interesting VT for sure.

The voting is closed. Now we have a look back to Sweden last year and Petra and Mans show us how to win Eurovision.

The winner is Lucie Jones with the song Never Give Up On You.

Thanks once again and hope you enjoyed the show.