Welcome to Malta and welcome to our rolling blog for Jury Final Dress Rehearsal of the Junior Eurovision Song Contest 2014. You know the drill by now. Just refresh the page to get the latest news on the contestants and their performances.

So we have Andrew in the press centre,  Garrett is on his way back from Vienna as we watch this and should arrive back in time for some after show interviews. Phil is off to the horse racing for a well earned evening off. Thanks to Phil for covering the first dress rehearsal this afternoon jointly for his sight at  OnEurope – and EurovisionIreland.

So the show begins on time with a wonderful montage of Malta as we see the logo flying through the air on a tour of the sights of Malta.  We then have the theme song Together and the countries introduced. Lots of dancers on the stage while the artists are introduced. We are introduced to our hostess for the show who them goes on to explain what will happen with the votes. Let the show begin.

An ethnic feel to the show opener. Nadezhda has 4 backing dancers with big horns. The costumes remind me of Red Indian and she also has feathers in her hair. She certainly is singing it in a confident manner. Not a bad start. 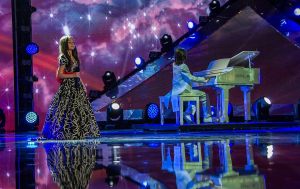 A really good ballad up next for Bulgaria. The lights in the arena just all went out 30 seconds in and Krisia eventually stopped. I hope this does not spook the Bulgarian team we could have a bit of delay till we get the lights back up. The crowd are getting restless. They have now sent out somebody to speak to the crowd and try to keep them occupied. The lights came back on after nearly 20 minutes delay. So we should get Bulgaria starting again. Still a delay to make sure it is all working properly. The warm up guy is now singing Old McDonald Had A Farm with audience participation.

Almost an hour delay and Bulgaria begin again. Kasia accompanied on stage with her twin brothers Abrahim and Hasan. A powerful vocal after a slightly nervous start. This is a really classy ballad from Bulgaria and I really hope this long break does not harm their chances of a good finish. 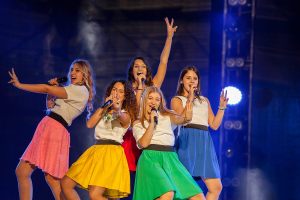 The Peppermints from San Marino on next. Very colourful in their multi-coloured  skirts. A decent attempt at a girl group. A good beat to this song some of the vocals are a bit off key but it has lots of energy and is performed competently.

Josie is on now for Croatia though she is half American from New Jersey. She has 2 backing dancers on stage who breakdance now and again. Josie is wearing a nice red dress and looks a bit nervous on stage tonight. The vocals are not that strong and do not help give this song enough impact. I fear Croatia may not do that well which is a shame as they are a great bunch of people in the delegation.

We get an interval act next followed by the hostess again.

Sophia on now for Cyprus with a very good dance song. Would not look out of place in big Eurovision. She reminds me a lot of Ivi Adamou. She is on the stage herself in a lovely white trouser, veil combination. A great vocal performance here and a very assured and confident performance too. Super great deserves to do well.

Lizi Pop sings for Georgia and the vocal is really quite poor tonight. The backing dancers are wearing white Mozart wigs tonight while Lizi is in the fluffy red dress again.  It is enthusiastic and reminds me of Wrecking Ball but it does nothing for me.

A mid tempo Schlager pop song from Sweden and Julia looks a little nervous during this but it is vocally fine. I like this song but not sure it has the oomph needed to get it over the line. Some of the vocal towards the end was woeful.

And now Ukraine with a fairy tale light song reminiscent of Frozen. Sympho – Nick are a very accomplished team of girls. So much confidence together and the backdrop is stunning. This will do very well I think after the previous weaker songs.

Another break in the proceedings for a brief interval act. 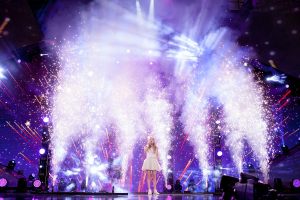 Ula Lozar is the sweet young singer from Slovenia. She simply cannot stop smiling. Her performance has a bit of everything from great lighting backdrop to pyros at the end. Her vocal is rather quirky, reminds me a bit of Lena from Germany a few years ago. This is a nice gentle ballad well sung by Ula and may well do better than many here expect.

Masa and Lejla from Montengro up next with their colourful chiffon skirts. This song is a bit of Balkan bubblegum pop with occasional rocky edges to it. A bright colourful backdrop the girls sound fine vocally and give it a real go.  I do not think it is a strong enough song to do very well though.

Italy make their debut at Eurovision with Vincenzo the only male singer in the contest. He sings a gorgeous sweeping Italian style ballad that would fit into San Remo. His vocal is so strong and powerful and this should do really well, Bellisamo!

Betty from Armenia on next and this is a bit of a belter of a pop song. Very colourful energetic and bouncy. She has dancer/acrobats with her on stage and the routine is very frenetic. This is the sort of song that often wins Junior and this one could also do it tomorrow night.

Another short break for an interval.

Alisa is one of the tiniest kids in this years contest and sings for Russia. She looks lovely in a flowing white(wedding) dress. A proper princess I would say. She has a lovely voice inside that small frame, very powerful at times. A very simple gentle ballad with no real gimmicks required. This will have a decent chance to do well too.

This is a classy Eurovision ballad, very grown up though a tad old fashioned.  It is sung beautifully and confidently by Emilija from Serbia. She is behind the piano at first then gets up for a walk about. A polished performance.

Federica from Malta is simply stunning vocally. Her song Diamonds is very Bondesque. Operatic in style and soars to heights not achieved by any other song. Brilliant indeed Malta could well be doing the double.

So we finish with a catchy pop song from Julia singing for The Netherlands. She has four male dancers with her on stage. Her vocals are fine and she is getting the crowd going with catchy chorus, it is on last and is memorable enough to do reasonably well with fans of this kind of genre.

Well that is all the songs and we get the usual recap for the voting. Following that all the artists from tonight’s show sing the theme song Together on the stage.

There is then an interval act which will be followed by the usual dummy voting. I am signing off now so hope some of you watch the show tomorrow and enjoy it. Garrett made it back to see 12 of the songs tonight due to the long delay with the power failure.

Tagged as: #together, JESC, Junior Eurovision