LATVIA :REVISITED THE BEST AND WORST AT EUROVISION

Some of you may recall that last year I published a best and worst at Eurovision article for every country that was taking part in Eurovision 2016 with the exception of Australia who were only competing for the second time. So this year I will publish one for Australia and Portugal who are returning. Also I will revisit each of the other countries to see if last years entry has entered the best or worst hall of fame. Now that the National Finals season is finished and all songs for Eurovision 2017 have been selected we now have 2 weeks where we wait for the rehearsals to begin in Kiev. What better way to fill the time than to look back over the 61 years of Eurovision at some of the best and worst entries that countries have sent to the Eurovision stage. There were 43 countries going to Kiev to take part in the 2017 edition of our favourite musical extravaganza,  until 22nd March when Ukraine authorities placed a ban on the Russian entrant Yulia Samoylova entering Ukraine. Then on April 13th it was announced that Russia had officially withdrawn from this year’s contest as announced in our article here.  So we continue our journey with Latvia who have won the contest once and finished third once too. They have also finished in the top 10 another two times. They have failed to qualify from the Semi Finals seven times with their lowest Semi Final finish 19th. They have come last in the Semi Final three times also. This has all been achieved in 17 participations. You can check out the previous articles from last year in the best and worst series for Ireland HERE ,Spain HERE, Austria HERE, Bosnia & Herzegovina HERE, Iceland HERE, Belarus HERE, Denmark HERE, Georgia HERE, Germany HERE, Cyprus HERE, Finland HERE, Belgium HERE, Hungary HERE, Switzerland HERE, Ukraine HERE , Moldova HERE, Estonia HERE, Norway HERE, Italy HERE, Slovenia HERE,The Netherlands HERE, Armenia HERE, Azerbaijan HERE, San Marino HERE, Israel HERE, Albania HERE, Poland HERE, Serbia HERE, France HERE, Romania HERE, Russia HERE, Croatia HERE, Czech Republic HERE, Malta HERE., Macedonia HERE, Lithuania HERE, Latvia HERE, Sweden HERE,  United Kingdom HERE, Greece HERE, Bulgaria HERE  and Montenegro HERE. Also the articles for this year for Belarus HERE., Germany HERE., Hungary HERE., Austria HERE., Cyprus HERE. , Denmark HERE. , The Netherlands HERE. , Finland HERE. ,Poland HERE. , Australia HERE. , Romania HERE. , Belgium HERE. , Slovenia HERE. , Croatia HERE. , Montenegro HERE. , Ireland HERE. , Malta HERE. , Macedonia HERE.,  Azerbaijan HERE. , Portugal HERE. , Czech Republic HERE. , France HERE. , Serbia HERE. , Georgia HERE. , United Kingdom HERE. , Sweden HERE. , Norway HERE. , Switzerland HERE. ,  Ukraine HERE. , San Marino HERE. , Israel HERE. and Moldova HERE. 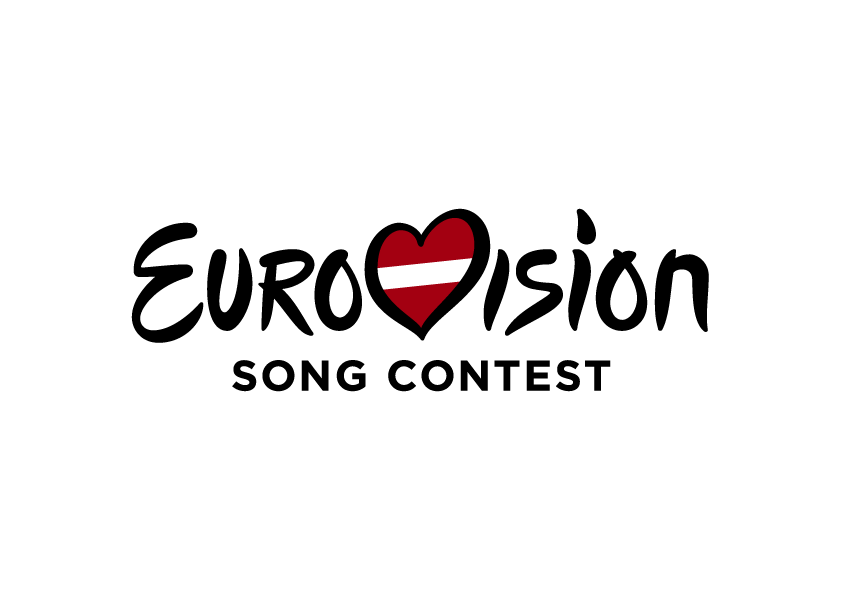 So this year Latvia are represented by Triana Park with the song ‘Line ‘. We will have to wait and see if it turns  out to be more of a best or  worst song for Latvia but the overall reaction is fairly mixed so far. You can catch up on our recent article announcing the winner of Supernova here.

So last year Latvia were represented by Justs with the song ‘Heartbeat’.  So how did Justs do in Stockholm? Well he came 15th in the Final after coming 8th in his Semi Final. This was the second year running that Latvia had qualified for the Final with a song written by Aminata and also was the 6th best result to date for Latvia. Therefore I am able to welcome him into the hall of fame as one of the best entries for Latvia.

So my selections for best and worst entries are based on a combination of actual results and personal taste. Now Latvia have seventeen entries to choose from making the task a lot easier. There are some  great songs from Latvia that have deserved better results over the years but I am struggling to pick out the three best. So I will highlight more good Latvian entries after I have picked three good and bad ones.

We only have to go back two years to find our first song that is one of the best for Latvia. The year was 2015 and we were in Vienna to see Aminata  singing the song ‘Love Injected’.

Now this was a cracker of an entry with a deep electronica and RnB feel to it. The staging really enhanced the performance and the vocal prowess of Aminata was breath-taking. Now she was born in Riga and her father was from Burkina Faso. She tried for Eurovision back in 2014 but did not quite make it. The following year though was more her big chance which she grabbed with both hands. Aminata has also written this years entry for Justs. She also tried again this year writing the song that came second in the Lithuanian selection called ‘I’m Like A Wolf ‘ sung by Aistė Pilvelytė. The song qualified from the Semi Final in 2nd place then finished the Final in 6th place with 186 points.

So moving along we look at one of the worst entries for Latvia. We were in Moscow in 2009 to see Intars Busulis  perform the song ‘Probka ‘.

Now the song was rather aptly sung in Russian. The song is unusually rhythmically complex for a Eurovision song and constantly changes in tempo. The title can be translated as Traffic Jam and was sung by the energetic Intars who was an established singer and musician in Latvia. He also was a judge on this year’s Supernova selection show in Latvia which chose Justs for Stockholm. The song finished 19th and last in the Semi Final with only 7 points.

So now we move back to look at another best of entry for Latvia. We were in Tallinn in 2002 and the performer was Marie N with the song ‘I Wanna’.

Now the song was sung in English and is most famous for Marie’s performance. She began wearing a white suit and a trilby hat, which was removed by one of her dancers. As the song continued, other dancers removed her suit jacket and her dark shirt, revealing the top of a red dress. The suit trousers were then removed, revealing the bottom half of the short dress. On the final beat of the song, the hem was pulled, revealing the dress to be much longer. This visual performance was also supported by a Salsa-style song, which made full use of the more up-beat tempos increasingly finding success in the Contest. Now Marie had tried to get to Eurovision the two previous years narrowly missing out on both occasions. The song went on to win the Contest with 176 points. The following year Marie co hosted the Contest when Latvia hosted in Riga.

Our next song that has to be considered one of the worst was in the year 2010 and we were in Oslo to witness Aisha singing ‘What For?’.

This was a song that a pop soul down beat song that was sung in English. Aisha and her female backing singers wore gold dresses, with one playing a Latvian accordion as an accompanist. The performance was more than a little off key and certainly did not go down well with the voters. It ended up finishing in 17th place and last in the Semi final with only 11 points.

So onto our next song that was one of Latvia’s best. It was in 2000 and Stockholm was witness to seeing Brainstorm perform with the song ‘My Star’.

Now starting with the song it was sung in English and was the debut entry for Latvia. It was composed by the lead singer Renārs Kaupers and it’s style was likened to Britpop music. The band’s performance is also memorable. Kaupers danced in a relatively eccentric manner, provoking cheers from the audience. Brainstorm was a band that was formed by a bunch of former classmates at least ten years before they appeared at Eurovision. After they appeared they went onto much greater International exposure. The song finished 3rd in the Final with 136 points.

We now arrive at another song for Latvia and it’s another of the worst ones. In 2004 we saw Fomins and Kleins in Istanbul with the song ‘Dziesma par laimi’. 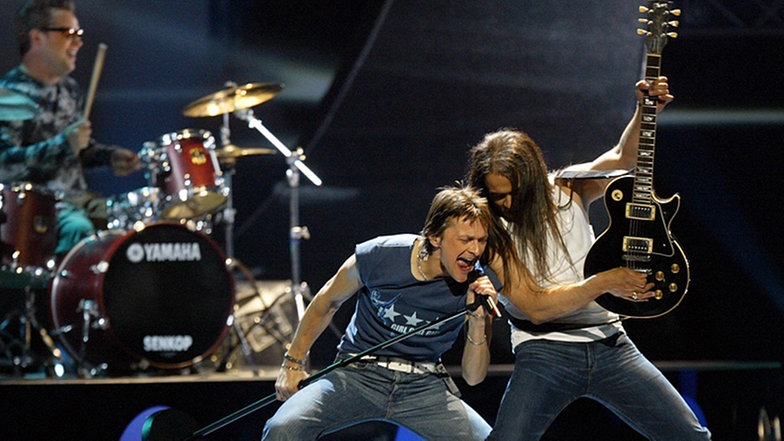 It was a song that was sung in Latvian and in fact is the only time in 16 occasions that their entry has been sung in the native language. The song was rock influenced and was memorable for being not very memorable at all. The two artists mentioned in the group title formed the band and both were accomplished rock musicians beforehand and hailed from the same city port Liepāja. The song ended up 17th in the Semi Final with 23 points.

2007 Bonaparte.lv with the song ‘Questa Notte’.

So there we have it folks, my little delve into Latvian Eurovision history and some of the best and worst moments over the years. Do you agree with all or even any of my choices? Feel free to comment below.