IRELAND : REVISITED THE BEST AND WORST AT EUROVISION

Some of you may recall that last year I published a best and worst at Eurovision article for every country that was taking part in Eurovision 2016 with the exception of Australia who were only competing for the second time. So this year I will publish one for Australia and Portugal who are returning. Also I will revisit each of the other countries to see if last years entry has entered the best or worst hall of fame. Now that the National Finals season is finished and all songs for Eurovision 2017 have been selected we now have 5 weeks where we wait for the rehearsals to begin in Kiev. What better way to fill the time than to look back over the 61 years of Eurovision at some of the best and worst entries that countries have sent to the Eurovision stage. There were 43 countries going to Kiev to take part in the 2017 edition of our favourite musical extravaganza,  until 22nd March when Ukraine authorities placed a ban on the Russian entrant Yulia Samoylova entering Ukraine. So it looks most likely that Russia will not take part and you can see our article announcing the news here. So we continue our journey with Ireland who are still the country with most wins in the contest with 7 wins. You can check out the previous articles from last year in the best and worst series for Ireland HERE ,Spain HERE, Austria HERE, Bosnia & Herzegovina HERE, Iceland HERE, Belarus HERE, Denmark HERE, Georgia HERE, Germany HERE, Cyprus HERE, Finland HERE, Belgium HERE, Hungary HERE, Switzerland HERE, Ukraine HERE, Moldova HERE, Estonia HERE, Norway HERE, Italy HERE, Slovenia HERE, The Netherlands HERE, Armenia HERE, Azerbaijan HERE, San Marino HERE, Israel HERE, Albania HERE, Poland HERE, Serbia HERE, France HERE, Romania HERE, Russia HERE, Croatia HERE, Czech Republic HERE, Malta HERE., Macedonia HERE, Lithuania HERE, Latvia HERE, Sweden HERE,  United Kingdom HERE, Greece HERE, Bulgaria HERE  and Montenegro HERE. Also the articles for this year for Belarus HERE., Germany HERE., Hungary HERE., Austria HERE., Cyprus HERE. , Denmark HERE. , The Netherlands HERE. , Finland HERE. ,Poland HERE. , Australia HERE. , Romania HERE. , Belgium HERE. , Slovenia HERE. , Croatia HERE. and Montenegro HERE.

So this year Ireland are represented by Brendan Murray with the song ‘Dying to Try’ We will have to wait and see if it turns  out to be more of a best or  worst song for Ireland  but the overall reaction is fairly mixed so far. You can vote in our poll on whether he will qualify for the Final here.

So last year Ireland were represented by Nicky Byrne with the song ‘Sunlight’.  So how did Nicky do in Stockholm? Well he failed to qualify for the Final after coming 15th in his Semi Final. So clearly not one of the best or in fact worst entries for Ireland so I  am unable to welcome him into the hall of fame.

So my selections for best and worst entries are based on a combination of actual results and personal taste. Of course Ireland boast 7 winners as well as coming 2nd four times and 3rd on one occasion. Also Ireland have come last twice. From a total of 50 entries to choose from the choices are vast.

First off I am going to start with one of the worst entries I think Ireland have ever sent to Eurovision and that was Dustin the Turkey with Irelande Douze Pointe.

Now of course Dustin went to Belgrade in 2008 with this little ditty which was booed at our own National Final when chosen. It went on to finish 15th in the Semi Final with 22 points therefore failing to qualify for the Final.  It was the first Irish entry to include elements of Spanish, Italian, French and German. Take a look at the video and see what you think.

So moving onto one of Ireland’s finest moments and to one of their winning entries. In 1993 Ireland hosted the contest for the 4th time after winning in Malmo the year before.  Niamh Kavanagh was selected to carry the hosts flag in Millstreet with the song ‘In Your Eyes’. 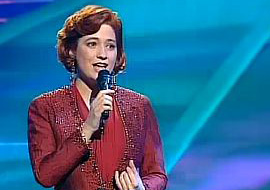 It was a wonderfully powerful ballad performed so well by Niamh that it fought off a strong fight for the crown by the UK’s Sonia and won with 187 points.  It went on to be the best selling single in Ireland that year and even charted at number 24 in the UK.

Moving on we go back to one of the worst entries for Ireland. Having come last in the Final on two occasions it may be easy to pick one of them as a scapegoat and true to form, I have. In 2007 Ireland directly qualified for the Grand Final based on Brian Kennedy’s excellent 10th place the previous year. So Dervish were selected to go to Helsinki with the song ‘They Can’t Stop The Spring’

Now you could not get anyone more Irish than Dervish with their repertoire basking in Irish traditional folk music. However the voters in the rest of Europe were clearly not impressed as they finished in last place(24th) with only 5 points from the Albanian back-up jury.

Back to one of the best entries from Ireland it would be a true scandal if Mr. Eurovision himself did not figure in the mix somehow or other but considering there are 3 winning songs to choose from we are perhaps spoilt for choice. I speak of course of Johnny Logan who not only has won twice as a singer but a third time as a composer too. So my next choice as one of the best is Johnny Logan with the entry ‘What’s Another Year?’

Johnny went to The Hague  in 1980 to represent Ireland and went on to win the contest with 143 points and launch his career in which he went on to win again in 1987. He also wrote the winning song in 1992 performed by Linda Martin. The song went on to top the charts in 5 countries in Europe including 2 weeks in the UK.

My last selection as one of the worst entries Ireland have sent to Eurovision takes us back to 1999 just before the new millennium. The Mullans were selected with their song ‘When You Need Me’ 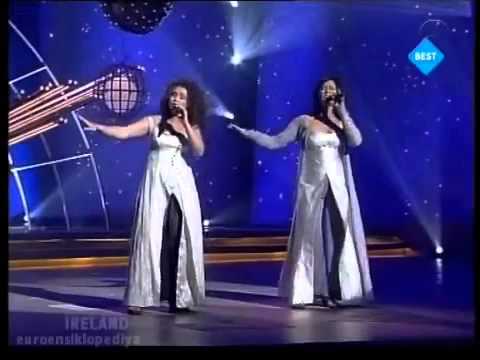 The sisters went to Jerusalem to fly the flag for Ireland and made the best possible start in the voting picking up a dubious 12 points from Lithuania. This was followed by only 6 more points in total leaving them languishing down in 17th place with 18 points. Bronagh and Karen Mullan were noted for their distinctly deep voices in this ballad.

So I have reached my final song choice for this article and it is yet another bestie for Ireland. After Johnny Logan won in 1980 Ireland got to host the following year in Dublin. Representing the host country were Sheeba with the song ‘Horiscopes’ 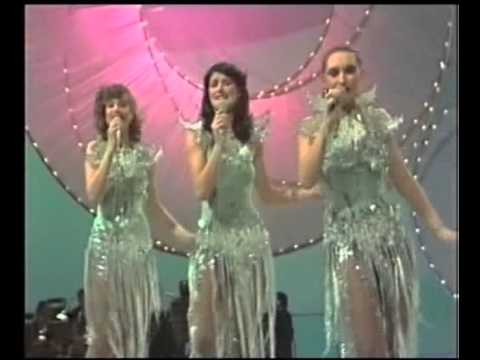 Now we had uptempo and glamour and glitz from Sheeba in what proved to be a rather good year for such acts. Bucks Fizz went on to win but Sheeba came a very credible 5th with 105 points and was and still is a very popular song among the fans.

So there we have it folks, my little delve into Irish Eurovision history and some of the best and worst moments over the years. Do you agree with all or even any of my choices? Feel free to comment below.