The Common Linnets may have placed second at Eurovision 2014 with ‘Calm After The Storm’ but it looks like they are set to score it big in America. In a recent Wall Street Journal interview, Isle DeLange revealed some potential news in the pipeline.

Speaking to the WSJ DeLange spoke of how the success of ‘Calm After The Storm’ both at Eurovision and in the European Charts has sparked an interest in European country music acts.

“In Europe, when you say you do country music, it used to not be cool,but it is becoming much more mainstream.”

Ilse went on to say that the band are in negotiations with a major country music record label in America with the hope of the band recording and releasing an album stateside.

Their Eurovision song has been certified Gold in Germany this week and is still riding high in the charts at #12 over a month after the contest in Copenhagen. 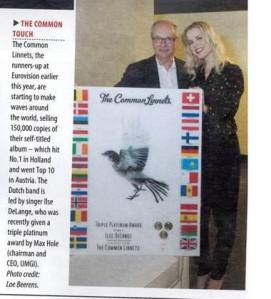 Recently their début album was certified triple platinum with sales of over 150 thousand. The band have their European tour beginning in October and the future looks bright for the band.

Can the ban crack America?