Austria : Everyone wants a piece of Conchita this Eurovision 2015 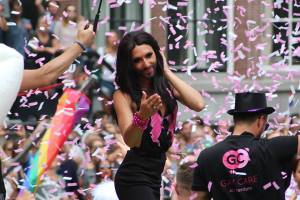 Demand and interest for Conchita Wurst is like her ‘Phoenix’ – ‘Rising’ – during the Eurovision 2015 season. The ‘Queen of Europe’  is highly sought after by international broadcasters.

Already Conchita performed at the Maltese Eurovision 2015 search in November and she performed ‘Rise Like A Phoenix’ and ‘Heroes’.

We also know that Conchita will be the star guest performer at the Swedish National Final of Melodifestivalen in March.

Italy have been smitten by Conchita’s charms for some time now. RAI actually sent a camera crew to meet her in Copenhagen this year – the only artist that they did that for. Conchita will perform at the prestigious Sanremo Festival on February 11th. RAI have even begun the hashtag of  ‪#‎ConchitaSanRemo on Twitter and it is gathering a lot of attention.

Roll on Germany – Yes Conchita will be performing at the German Eurovision National Final on March 5th. There is big news about this performance – SEE HERE.

There could be more Eurovision performances to come before we actually get to Vienna when Conchita will host the Green Room at the Eurovision Song Contest.

Which show will you be tuning into? And for those that will say none – how drole and predictable but we know you will be secretly tuning in 😉