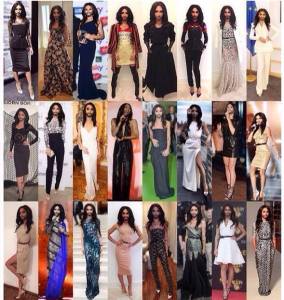 Conchita Wurst is known for winning Eurovision but over the course of 2014 she has become a style icon. So we asked two of her most keen supporters and fashionistas to count down Conchita’s best looks of 2014. First up we have the views of Angie Tilly Marper who wrote for Eurovision Ireland before on ‘Why Women Like Conchita Wurst so much?’

There must be thousands of Fans who have so much they would like to say about Conchita and I am deeply honoured that Garrett has asked me once again to air my thoughts.

I am sad to say that I have missed so much of her achievements over the past couple of weeks, what with work, shows and illness, but I am thankful to be part of the #Unstoppable Conchita Wurst family who are incredible and keep us all up to date.

In a few short months Conchita has fast become a fashion icon, with fans having their own special versions of her. Leggy sexy, unique chic, suited and booted, neat casual, high fashion, sophisticated lady.

To choose 3 out of so many was a huge task but here are my choices! 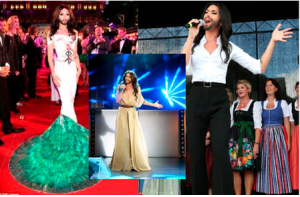 First and foremost has to be the Haus Mascara Life Ball Dress. In my view, showing Conchita’s absolute love and friendship for Raphael Massaro/Tamara Mascara, her passion for art and her wish to push the boundaries a little. The dress was a masterpiece and said so much about her and her background. It was both feminine and masculine and very artistic. She looked absolutely magnificent and it became for me, THE iconic image of Conchita in 2014.

My second choice is the John Paul Gaultier dress she wore for Starnacht Wörthersee 2014. Some called it “the JPG Raincoat”. I wasn’t sure about it myself at first but the more I looked the more I saw. This night was a real turning point for Conchita. Her performance of “Believe” came straight through the TV screen into my soul, it was beautiful, heart-rending. They say an artist cannot truly “sell” a song unless they have lived it, she made me cry and made me “believe” she had experienced that exact situation.

The dress was simple but exquisite. It looked as if it had been created on her body, it suited her so well, the way the fabric pooled around her feet, as the world will no-doubt.

That night she proved to me that she doesn’t need to dance, she could stand in one place, look at you and sing, the slightest arm gesture saying a million things. That is enough, her voice and her presence are just intoxicating.

My third has to be the simple, chic, crisp white shirt and trousers of Bart Mitterndorf, such a perfect choice. She could have worn any of the hundreds of creations at her disposal but she chose a simple outfit with total respect for her family, friends and her surroundings. She has never put a foot wrong fashion wise, every show setting and personal appearance is different and her choices have been so right!. She could have carried on with the over the top Drag Queen look, she can still do that for the right occasion, the fun-loving cheeky Conchita is still there, but she has blossomed into the beautiful groomed Conchita Wurst the world will embrace and grow to love as much as we “Unstoppables”!

I suppose It would be wrong of me not to include the exquisite gold Eurovision dress created by Conchita herself, so if Garrett will allow me this one indulgence I will add it as my fourth choice ! ❤

Thank you Garrett for giving me this honour and I look forward with anticipation to the future and what Conchita has in store for the world in 2015 and beyond….. because there is most definitely a “beyond” for our Conchita and we will be by her side to support her through thick and thin! ❤

We would like to thank Angie for her article. I am sure it will get fans to think just what is it that they like about Conchita as it seems to go beyond just music. You can follow Angie’s Facebook pages on Conchita andTamara by clicking on the links.