Eurovision 2015 : Trainspotters get VERY excited with the ‘Building Bridges’ Eurovision Trams in Vienna 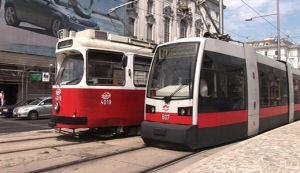 Trainspotters get ready to have your minds blown! Eurovision 2015 : Hop-on Hop-off the ‘Building Bridges’ Eurovision Trams in Vienna.
Vienna is a Green City and want to show this by promoting the use of Public Transport on their new #BuildingBridges decorated street trams in the city. The Building Bridges trams will be in operation until after the contest.

The tram decorations are designed by Wiener Linien, ORF and GEWISTA.

Speaking to Wein.GV – Deputy Mayor and Councillor Renate Brauner Öffi:
“2015 is a special year for us, we can show in front of an audience of billions that Vienna is not only the most liveable city in the world, but also through diversity, joy and tolerance scores. And that the Eurovision Song Contest logo dresses up first of allpublic transport in Vienna, I am particularly pleased and is also a good sign that we like the songwriting in Vienna sustainability and environmental friendliness even at huge events Contest large.“Wiener Linien CEO Eduard Winter: “The trams characterize Vienna’s cityscape enormous, 500,000people ride it every day and so much more they see the ESC Bim we manage to make the Song Contest additionally visible and the interest on. to increase “. 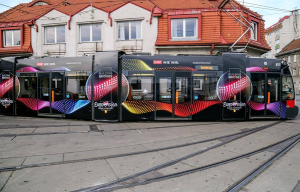 The fist pictures of the Eurovision designed trams will be shown on the ‘Vienna New Year’s Concert’. Remember that the Vienna Council are quickly making vast stretches of the city centre ready to be pedestrianized before the concert that we reported on back in August
So if you’re a lover of all things Eurovision and Trains – then you must be in a state of ecstasy right now!
Author/Editor in Chief Garrett Mulhall
Source : Wien.GV