Watch ‘Through the night with Conchita Wurst and Jean-Paul Gaultier’ 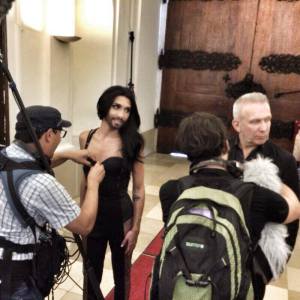 Set your clocks for November 2nd. ‘Through the night…with Eurovision winner Conchita Wurst and Jean-Paul Gaultier’ will be aired.

Yes the ‘European Dynamic Duo’ are set to take over the airwaves on November 2nd on ARTE.TV the French/German Cultural Channel

You remember that Jean-Paul Gaultier visited Conchita in Vienna earlier this year – well ARTE.TV are promoting the upcoming show called ‘Through the night with…’. November 2nd will be of interest for Conchita and Eurovision fans alike as

We will have more details of the show closer to the date but you can check out the site in the meantime HERE.

This should be fun and a good watch for those going to Vienna next year for Eurovision.