My first ever day at Eurovision 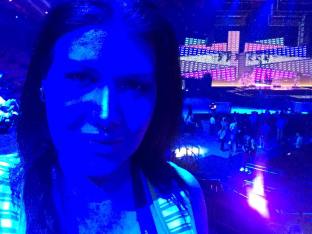 I just had to share with you my first experience of Eurovision in the flesh, so to speak. Firstly, I cannot believe that I’m here – 25 years ago when I first turned on my TV set in our little living room in Guildford never in my wildest dreams did I ever imagine that one day I would ever be in the audience of the show, let alone be here in the press centre recording interviews, chatting to singers, watching rehearsals and hanging out at the Euroclub.

Having arrived at the Press Centre, which is essentially on the pitch of a hockey stadium, and got my accreditation sorted out and picked up my security badge, currently my most treasured possession in my life, I went to meet the team and find my way around the place which will be my home for the next week.

Now, the astute among you will notice that my first day is actually half way through the Eurovision fortnight, whilst the rest of the Eurovision Ireland team have been beavering away in the press centre bringing you all the rehearsal news and interviews, I was stuck at work and unable to get out to Sweden until yesterday – however if you follow us on Instagram, then that was me back at home!

My first real heart-stopping moment though came when I was shown how to get across to the arena to see some of the rehearsals. We arrived as Kaliopi was about to have her second run through and I don’t think anything could have prepared me for it. The stage that I had seen so many times in photos and video was so much bigger and brighter, so much more alive and the clarity of the music as the backing track to ‘Dona’ began was amazing, pure as new fallen snow (it probably helps that I really like the song and Kaliopi too!) and then came that voice. Absolutely perfectly pitched and with the tone of fine crystal that Kaliopi is known for.

I had seen Kaliopi at the London Eurovision Party and interviewed her, then been right in the front when she performed on that stage and I have to say the power of her voice from less than 2 meters away is mind-blowing (just like Conchita’s) and then put her on a big stage, with lights and video and backing singers and camera and wow, a whole other level (just like Conchita!). It took every ounce of my being to stay in professional journalist mode, when my inner 13 years old Eurovision fan was moved to tears by the overwhelming situation.

I also head out into this week with more personal investment in many of the songs, Kaliopi and Dona being one of them. Something I never expected to happen as a result of meeting the singers and interviewing them for Eurovision Ireland, is how much I would get along with some of the contestants, how I would care about how well they perform, and how they would be feeling after their rehearsals. I have to mention Nicky Byrne here, I met Nicky in London and was able to get one of the first interviews he gave, many of you watched it I know and I’ve had great comments from many of you. Of course we are Eurovision Ireland so we naturally support our own artist, but I’ve never felt more of a personal connection to a song, I feel like, at least in a small way I am on this journey with Nicky and RTE, I cannot imagine what I will feel like on Thursday when it comes to Ireland to take the stage.

I know there are lots more adventures to come during the week and I cannot wait to see what else Eurovision 2016 has in store.