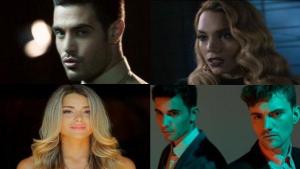 Greece – Welcome to our LIVE ROLLING Blog of the Greek National Final. The show and our blog begins at 20:00 (CET).

“OPA” as tonight will be a truly Greek Celebration as 2014 marks the 40th year of Greece competing at Eurovision.

The hosts of tonight’s show are Despina Vandi and Giorgos Kapoutzidis and there will be performances from former Greek Eurovision participants Elpida (1979), Sophia Vossou (1991), Katy Garbi (1993 – My Favourite) and Kalomira (2008).

The result will be decided by a 50/50 Jury and Televote result.

Ouzo and Moussaka ready so #JoinUs

A trip down Greek Eurovision Memory Lane – “Stop Me” – no seriously STOP ME Peeps!

You know that Greece gets little rain as those umbrella ella ella ella twirling skills are no match for the Irish weather!

LOVE IT – The presenters say “Welcome Europe Viewers……..Please vote for our song at Eurovision because Cyprus is not there this year”. OPA!!!

Kalomira (or as I fondly call her Calamari) brings her “Secret Combination” back but with a funky urban feel to it – complete with Adidas Tracksuit Wearing dancers – but she looked like she was rolled in Gold Glitter!

TV Ad break – I know things are tight in Greece with the economy but the first advertisement has 4 people sharing one sandwich! We feel your pain Greece. I have a family of 5 nibbling on my foot long – Subway sandwich that is!

They still have their cute hand choreography! That was #FABULOUS!!!

Can we just listen to previous Greek Eurovision entries as they are great!

Ok we are 35 minutes into the show and we are still reliving past Greek Eurovision entries. I don’t know about you but I am on my third portion of moussaka now!

I have just noticed that the female presenter – Despina Vandi – is wearing a see through dress!

My favourite Greek entry – “Ellada, Chora Tou Fotos” by the AMAZING Katy Garbi gets a 21st Century make over!

Back to 1979 with Elpida and “Sokratis” for a live performance.

We are 1 hour into the show and now on a TV ad break and still not a 2014 contender in sight!

Ok I think we are about to start with the selection of the Greek 2014 Representative as Despina Vandi and Giorgos Kapoutzidis – our presenters – are back and with new clothes on!

Pleasant enough song. All very Dazzling White and would be great for a washing detergent advertisement. It had hints of traditional music but failed to live up to my expectations.

Football horns were blowing in the audience for this one! This got the crowd going and I am regretting that 4th slice of moussaka now as I was bopping around to this great little pop song that has some great brass instruments blasting! This is a TUNE!! The vocals were not great – but hey if you were waiting to sing for over an hour you would be anxious too. But you can forgive some pitching on this performance led song

Sorry was Kostas singing? I didn’t know it. I was too bust looking at those guns and abs and quads etc etc etc. Yes in Eurovision’s Next Top Model Kostas wins hands down.

A rock/pop song that he gave every inch of his well toned body and effort into! Vocally he was good and better that Freaky Fortune before him. He may not have the best song but he sells it better than anyone else in this final. I think he may have the edge over Freaky Fortune 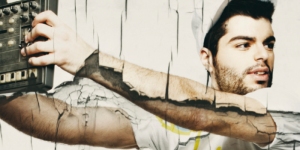 THIEF – THIEF – someone stole Josephine’s ability to sing in tune! Oh there wasn’t one note sung in key or I just never heard of the key that she was singing in! A techno pop song that could have been good but Josephine was shell shocked from the minute the cameras were on her. No matter how much she swooshed her hair about it couldn’t hide how bad this sounded.

I feel like we have already had an hour of Interval Acts before the competition began but it is the fantastic Koza Mostra feat. Agathonas Iakovidis from last year with the totally AWESOME “Alcohol Is Free”

Our Hostess Despina is back singing in her negligee! Guess someone is happy to “Shake what you Mama gave you”

Now a video of Helena Paparizou talking of her memories

All the night’s guest performers line up for a round of applause of and a CHAT!!!

Well I had them just half a point in second place

Well done to the guys and to Greece. This is a sure qualifier for the Final

Hope you enjoyed the show!