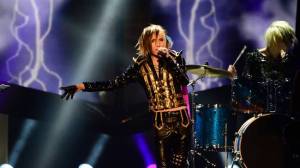 SWEDEN – Welcome to our live rolling blog for the first Heat of Melodifestivalen 2014 aka The Swedish Eurovision National Selection for Eurovision 2014. Just refresh the page for our live commentary on the show. You can watch the show with us HERE on the SVT Play and tell us if you agree with our thoughts

Tonight you will be in the hands of Andrew James Main from the team. The show starts at 20:00 (CET) so get ready for a smorgasbord of Schlager, Dance, Pop, Rock and Ballads. “Something for everyone in the audience!”

8 Acts compete for 2 direct places in the Grand final and then another 2 for “Second Chance Contest” – Remember Robin Sternberg had to go that route to win Melodifestivalen 2013.

The running order for tonight will be as follows

20:00 CET is when we start our coverage here. Just refresh the page.

So the broadcast begins with some Swedish commercials.

And we are back where Eurovision 2013 ended in Malmo.

Taking the piss of Danish winner, burning all tin whistles in the audience.

All the artists are introduced then they explain the voting and show the numbers to call.

So first up we have YOHIO who won the public vote last year but came 2nd in the final.

His song is called To The End written by Andreas Johnson among others. His look is very striking

I like the song but it has a mixed reaction from the audience at Gracieland(where I am watching it from).

The second song tonight is Aleo from Mahan Moin who is Iranian decent. Her song does have some eastern touches to it.

She is all in black with five dancers also in black. There is use of fabric and wind machines. I little bit off key at times

but a reasonable performance overall.

Song 3 is written by Frederick Kempe who is no stranger to Eurovision. Linus Svenning sings Broder(Brother)

and is a heavily tattooed skinhead with lots of piercings. A good voice he is getting into his song with good gusto.

It builds well and has a good feel to it. I think this could be an unlikely dark horse to progress.

Now we move onto song 4 which is Casanova sung by Elisa Lindstrom. This is old style schlager/danse band

appeal with the voters generally. 6 male dancer Elisa is in a black and white number. It is sung well and will

appeal to many but I am not sure it will have the broad appeal to progress. 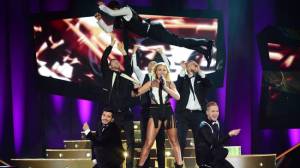 who is named after my favourite Spanish lager. This is the most poppy sound so far. A good beat and very catchy.

He is dressed fairly plain in a mauve shirt and black trousers. He has 2 male backing singers as well as male band with him.

He moves up onto a clear cube and this gets the best reaction in the hall so far.

Song number 6 is Songbird which is sung by Ellen Benediktson. The first  and only ballad in tonight’s show.

Ellen has a quirky but lovely voice. The song is gentle to start but really rather lovely. The song then builds to a

really nice finish. This could be another dark horse tonight. 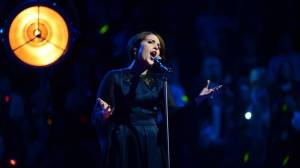 Song number 7 is Sylvester Schlegel with the 2nd song tonight in Swedish. He looks like a version of Dr. Who

in a striped jacket and wide brimmed hat. It has a very sixties feel and his voice is a bit rough around the edges.

He is accompanied on stage by a mixed male/female group. He certainly gives the song plenty emotion

and we finish with ticker tape. 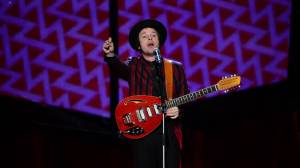 represented Greece and won in Kiev in 2005. She wears a black dress with see through lacey bits on the sleeves

and the bottom of the dress. I very accomplished performance as you might expect. Survivor does have a certain

oomph to it. We get a pyro display toward the end. A decent song for sure.

So there we have it. Here at Gracieland we have 5 people watching and our overall result for comparison with the

real result has  Alvaro and Helena going direct to the final. YOHIO and Ellen are off to the Andere Chancen

That is our thoughts but we will find out shortly the real results.

We now have the results

Alvaro is out as is Mahan and Sylvester.

Alvaro was our personal winner here so what do we know.

Now we have the next set of results.

The first song direct to the final is Yohio with To The End.

he looks mighty relieved I have to say.

The next song goes to Andere Chansen and it is

and then it Survivor by Helena Paparizou.

and finally Ellen goes direct to the final with Songbird.

Thank you for following the blog. Did the best songs go through, what do you think?