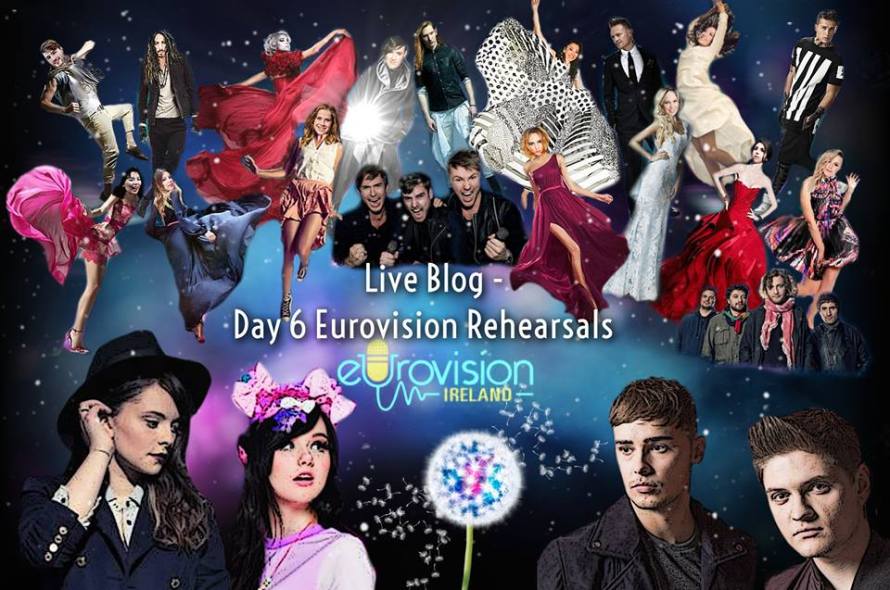 Just when you thought you had seen the best of us, we are back and better than ever!!  If you were thinking of going anywhere else for your fix of Eurovision rehearsal news, then SHAME ON YOU!! Missed yesterdays action then check it out HERE

You can follow our LIVE BLOG HERE where we will have the full 3 minute videos of the performances from Semi Final 2 today PLUS the first rehearsals from the UK, Germany and Italy. Also make sure to check us out on Periscope where you can get a live feed to the rehearsals – get that through our Twitter Account HERE

You know the drill by now. Just refresh the page for our live updates. We start at 09:50CET. You will be taken care of by Phil (our good friend from OnEurope) – So if you want an honest opinion of how the rehearsals are going then tune in here.   The other members of the team should be chiming in from time to time, but mostly its all me me me me me!!

Who is up today

JAMES: As someone who is part German, I am usually always very positive about their entries. Though this year, I am struggling. While Jamie-Lee gives a very proficient performance vocally, I’m massively distracted by that ensemble. It looks like a bizarre hybrid of Alice in Wonderland and an Anime character with a touch of Christmas tree sprinkled on top. The worst of it is, it’s all so unnecessary. She sings well and doesn’t need the attention  grabbing garb. Is that Barbara Dex on the phone? I think it might be…

JAMES: Italy have just got possibly the biggest reaction I’ve seen in the Press Centre all this week! While the animations of raindrops and star bursts give the performance a very modern look, there is also something distinctly classical about this. Perhaps it’s the garden of flowers surrounding Francesca, or perhaps it’s the bilingual song that reminds of the Eurovision of yesteryear. We’re busy debating the symbolism of the garden, whether it’s the forbidden fruit of Eden or shows how there is no degree of separation between man and nature. Whatever the story, Italy is on to a potential winner here. You heard it here first!  It’s got a massive round of applause every time it’s been played in here and we all think it’s brilliant!

JAMES: Still just me here passing judgement it seems! Being honest/blunt, I was in the hall the night the UK chose their entry and I was sceptical about our chances. But seeing it up there on the Eurovision stage, I am very pleasantly surprised. It’s not gimmicky, it doesn’t try to be clever or spectacular. It just offers a simple, but solid performance that won’t horrify on the night (like various other entries I could mention!) No, it’s not a show-stopper and a (very) unlikely winner. But it’s still an entry we can be proud of that will be spared the indignity of single digit points, or worse still, nothing at all!

PHIL :   Yeah he looks very good on stage and, although he looks like an angsty tweenager in looks the voice is rich enough to ensure a proper performance from him.  He’s all strutting and not doing a great deal of movement which is all good because if he was all over the stage, that would be a problem.  The floor cuts away and the visuals are really good for this one.

PHIL : I’m sorry but I just don’t get this at all.  To me it’s just pain upon pain heaped upon misery for 3 minutes.  I appreciate the people of Eastern Europe like this kind of thing, and he is populist over there but in a Europe wide contest people will just see a man singing a dirge at me that is repetitive and just plain boring.  This is borderline qualifying at best but it has enough friends to see it though…. maybe…

Thankfully sense has prevailed here and Rykka has got rid of the blue perm and has straightened her hair but, sadly, even this isn’t helping the song.  As with Poland, I just don’t get any attraction to this and Rykka still keeps stooping down for no reason and her net curtains she is wearing as a skirt aren’t helping.   There is nothing and no-one on stage to help her out here and it’s literally all about her.   I’m still not hopeful this will finish anything other than last.

JAMES: This is actually a big improvement on the last rehearsal. Rykka has toned her perm down (by toned down, read straightened it to within an inch of its life), which definitely improves the look of the performance. This being said, the basics of the show haven’t really changed at all. Minimal lighting, see-through skirt and far too much lunging. It’s definitely an improvement, but will still struggle to qualify.

One needs to compare this to  Conchita. In the same way that you were disarmed by the look and concentrated on the voice in 2014, in 2016 the same thing is happening with Hovi.  There will be a minority of people that will concentrate on the perceived campness but when you can sing the song that well, that rightly goes out of the window. The feeling around this bit of the press centre is that it was “Stunning”

This is a live contender for the top 10 in the final.

There is a little bit of a break at the moment so it’s time for me to let you know that Serbia is really really good.  There is no-one doing anything wrong here.  It looks great on screen, her voice is gravely and excellent, the red set and the black dress that she is wearing looks fantastic and she is clearly channeling Ms Whitehouse.

The overall look and feel is a confident and competent performance that is certainly winning friends and influencing people with the staging and the song.  This is going to do very well – in fact do not be surprised that it will be Top 10.

JOHN : Nicky is back and he gave another assured rehearsal performance. There’s good interaction with the camera and it’s balanced by performing to the audience that will undoubtedly be bopping along to this next Thursday. The band behind Nicky are at a respectable distance, yet add to the overall effect and help where some other acts are alone on stage and appear to be quite lost. ‘Sunlight’ has a nicely refreshing modern sound that should go down with the televoters at home as well as the juries. My only concern is that this is going to be a bloodbath of a semi-final, and several likely qualifiers will fall by the wayside. All we can do is hope that Nicky can give a similar performance to this both next Wednesday at the jury semi-final, and on Thursday night for the televoters.

PHIL : In my opinion this tramples all over Nicky.  This song is stronger and presented better in many ways.  Vocally stronger, visually more in keeping with the song and, lets face it, Kaliopi has done this before and she knows how to project to a Eurovision audience whereas Nicky tends not to project when he is singing in his band.

We would have liked to show you this, but our youtube video has been blocked by copyright by someone…. we’re investigating this matter with the delegation presently.

Donny appears to have had a semi perm in his hair and he now looks very silly indeed.   There is a moment in this song where he attempts to jump through crossing CO2 cannons… In his first rehearsal though he almost stumbled and fell over and looked particularly perturbed. Is it wrong to say that we were too busy laughing and checking to see if he sung any better to care?? – This song has a repetitive hook and is very annoying!! – It’s borderline qualifying.

PHIL : Now remember something here SBS have sent in their ideas for this staging months ago and have not said ” Oh, she’ll need to be on a granite cube but how on earth is she going to get down from there?? – yup, that’s whats happened.  Dami was sat on this cube but the stagehands there were on the USB stick were clearly supposed to be hidden by a high camera angle.  hahah no, that failed badly on the first two runs.  This is *not* a bad song… it’s just a 3 minute rolling hook which may or may not do well… it depends on how the wind blows.

PHIL : This is dangerous.  Poli doesn’t half love the camera and sings a very well crafted song *at* me rather than *to* me – something which you need when the song has a lot of grunt, and this one certainly does.  There are lights a plenty at Poli’s hinges (oooh-er) – she dances like she has rickets but the fast cut lighting, the staging, the background of the white noise all suit the tempo of the song.  The performance will be spot on.  This will qualify easily and, if everything goes well, the Jury will love this and the televoters will pick the phone up for a good song.

RICHARD: I think Denmark could be a dangerous qualifier. The teenage girls will love these boys, the gay chaps will love these boys and even the mums of Europe will love these boys. Technically, the performance was a lot more polished after their first rehearsals went something wrong on each of their run throughs. With the way this semi final is going, Denmark and the boys of Lighthouse X could do one better than Anti Social Media last year.

RICHARD: The Ukraine entry is dark to begin with, very dark in fact. Being such a personal song to Jamala and her family, we always knew there would be a lot of emotion and power behind the stage performance. The emotion builds and visually a tree builds up the back of the stage. I think, unless the story is known, many won’t get this entry, however it is a sure qualifier.

PHIL : Now I have said during today that I like simple staging, so Agnete standing on the stage singing at me should be a good idea.  However in this instance it is actually the SONG that is the problem here.  It is clunky and changes gear at a very weird juncture several times.

This is too difficult for Europe’s televoters to get into

and  people at home will be going ” you know what?, I just don’t like it”.The Blue staging and the white dress she is wearing works well on the television but there are better things to televote on.

RICHARD: Albania is pure gold in terms of costume and staging. On Thursday I sadly described it as a bit non-descript. However after this performance, it seems to have just come together. I’m still not convinced it is strong enough to qualify, but this is my opinion and others would probably think differently.

What’s the pressure, none at all after that sparkly, disco performance we have just seen. Laura, who gave us a pure guilty pleasure on Thursday, just upped the barrier once again and will not face any pressure with this dance floor filler (or should that be arena floor filler) next Thursday evening.

And that’s it…. all that remains is to wish our reader that has refreshed the page all day a very good night! 😉