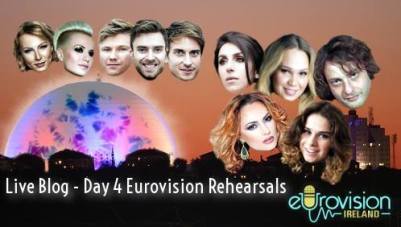 Just when you thought you had seen the best of us, we are back and better than ever!!  If you were thinking of going anywhere else for your fix of Eurovision rehearsal news, then SHAME ON YOU!!

You can follow our LIVE BLOG HERE – You know the drill by now. Just refresh the page for our live updates. We start at 1000CET. You will be taken care of by Phil (our good friend from OnEurope) andThe other members of the team should be chiming in from time to time.– So if you want an honest opinion of how the rehearsals are going then tune in here.

Also, Watch our Hourly news bulletins on Periscope AND here….

Who do we have rehearsing today?

JAMES: A very capable performance from Slovenia this morning, with some impressive gymnastics from ManuElla’s solo backing dancing and a shower of pyrotechnics. ManuElla’s dress is also very apt for grabbing the audience’s attention, and as someone at this table pointed out, there really is something for everyone in this performance! Will it qualify? I’d like to think it could. It’s a very safe, inoffensive Eurovision entry that will collect points whatever happens.

JOHN: We’re all bright-eyed and bushy-tailed for day four and Manuella greets us in an interesting frock. It’s long, white and let’s just say it doesn’t draw your attention to her face. There’s also an athletically-built gentleman who swings around on a pole to her left. I’m not quite sure of the significance of him but it piqued the interest of a few people around me. This song is most definitely a safe song. It’s not full of histrionics or dourness. It’s just, well, safe. And that’s why I think Slovenia will struggle to qualify for the final.

PHIL : Poli is now on her third go at this and it just gets better and better as far as I am concerned. She starts by singing in front of flashing white noise as though it’s closedown time on Belarussian TV but do NOT turn off your sets, this one is a good one.

Poli is clearly a seasoned performer as she effortlessly knows where the camera is and the dance movements really suit the song (apart from the bit where she thinks she is in a knobbly knees contest) and by the time you see the backing singers and they join in the fun, her dress lights up but not in a silly way ( just the shoulders and knees… you’ll see). Vocally, not one note out of place which has been a change this week.

This is a classic pop song that should well walk out of this bit of the contest and is a very live danger for a top 5 in the whole thing.

It’s suddenly not a 2 horse race.

JAMES: Bulgaria has had a bit of a rocky Eurovision history, and it is so wonderful to see them finally get it so right. Poli owns that stage – it’s as simple as that. And all of the elements of the performance come together perfectly. Poli’s unique light up garments, the lights, her quirky dancing, it has Eurovision hit written all over it and I’m thrilled!! Very well done Bulgaria! And very well done Poli! This will stride into the final.

RICHARD: After what be quite frankly be described as a terrible qualification rate in the Eurovision Song Contest, with only one finalist to date, Poli Genova is set to change this in the second semi final next Thursday. The stage and lighting are effective, yet simple. The best way I can describe this effect is breaking shards of glass. For two thirds of the performance, Poli is on her own, but joined for the final 45 seconds or so by her backing singers. This is a challenger in the final.

JOHN: This is more like it. I’ll say from the start that this is sailing through to the Saturday night final. It’s professional beyond belief. Poli is in a flesh-coloured dress with a long black overcoat over the top. Towards the end parts of her costume illuminates. The backdrop has been carefully thought through and it’s already polished. The camera loves her. As I’ve mentioned, this is a definite finalist.

JAMES: Denmark appear to be having substantial sound and light problems this morning. One of the light-up mic stands was dark, and one of the sound systems and mic down. Though these issues were resolved, admittedly it does seem to have thrown Lighthouse X off their stride a little – but to be fair, that would be true of anyone! It’s a pleasant song and I had it marked to qualify, but coming between Bulgaria and Ukraine makes me wonder if it will struggle to stand out.

JOHN: The Danish trio have stolen Kate Ryan’s twinkly microphone stands. This seems to be their gimmick. Unfortunately it’s another song I’m having trouble warming to, as it’s another safe one. Not safe in a Slovene way, but safe in an unfortunate-gap-between-Bulgaria-and-Ukraine sort of way. I think no matter how good the three Danish lighthouses are, or competent their song is, this is going to struggle.

JAMES: Jamala gives a raw and heartfelt performance as always. But being honest, I much preferred the staging from the Ukrainian final. I find the light effects from the first half of the performance actually detract from it all. This being said, the finale gave me chills. Coloured lights enveloping her and the blossom into a tree bearing the colours of the Ukrainian flag. I think it’s a touch too contentious to win. But it will definitely place and place well – how can it not, the vocal performance is as sharp today as it has always been!

JOHN: This is an earnest and dark song going into potentially sensitive themes. And Jamala looks suitably sombre. Staging wise it’s predominantly dark (again) but there’s a huge amount of lighting effects. Splashes of colour radiating from where she’s stood to start with. Bright mixing of colours on the backdrop, ending with a large tree in blue and yellow. It got a massive round of applause in the press centre.

JAMES: Norway have opted for staging very similar to that of their national final. It’s not bad, but something with a bit more ompff would have been nice. Reminds me a lot of the movie Frozen, especially the floor patterns. I really suspect juries are going to like it though.

JOHN: There are no surprises here. The very elusive Agnethe is sticking to the general formula that won her MGP. She’s in the same dress and gives pretty much the same performance as we saw in Oslo. It bumps along nicely and I think it again falls into the ‘safe’ category we’ve already seen a couple of times today. Being in Sweden may be an advantage for this, but I think it’s another one that will finish somewhere between 7th and 14th.

RICHARD: One of the songs I’m still not sure about, but I might just have been won over. Cast yourself back to the psychedelic sixties and you’ll get a modern twist. The technical advantages will also multiply the appearance of the band members on stage. It isn’t beyond possibility that this could qualify.

JAMES: I have to give Georgia credit for sending a genre of song to Eurovision that wouldn’t usually be considered a traditional entry. Well, the staging definitively has instant impact. The mirror effects in particular are a great way to  grab the attention of the audience at home and makes the whole performance stand out. Personally, the sudden stop at the end was too jarring for me, but others here really disagree and think it’s fantastic. I think the entire package combined is going to polarise viewers across Europe. People will either love it and think it’s brilliant, or be very confused.

JOHN: The shots are of this involve lots of mirroring, and mirroring of mirroring. So much so, there appear to be many many people on stage, more than the six permitted. It has to be admired for being unique in style in this contest and that might actually work in its favour; it stands out and has gone up in my estimation. Indeed, the Britpop sound to it may strike a chord with some of those whose formative years were in the 1990s. It won’t win this semi-final, but definitely won’t finish 18th in this semi-final either.

RICHARD: After this first run of rehearsals, I find the staging all very non descript. Thankfully Eneda doesn’t seem to get lost on stage like a lot of other soloists do – but I think this is a lot to do with the lighting. At this stage, it’ll be tough for them to qualify.

JAMES: I can’t help but hear a sort of Bond theme emerging from Albania. But that’s where the similarities end.  This could have been staged very differently and been made quite special, but instead it’s been done in a very ordinary, very uninspired. Minimal lights, no real choreography, routine or climax, and the costume is very everyday and normal. I really can’t see this grabbing many people’s attention if I’m honest.

JOHN: We finish with something that gets a big round of applause from the press centre. Laura and her little crew have choreographed this song to within an inch of its life. It is vivacious and bright and surprisingly (for me at least) very uplifting. I was quite impressed with how this is performed and it looks like we have another qualifier.

RICHARD: What a great way to end semi final two. Fun and fabulous will get that arena dancing and it’s so nice we won’t be ending the performances on a downer next Thursday. Considering nobody ranked this back in January, this could finish quite highly in the Saturday night final.