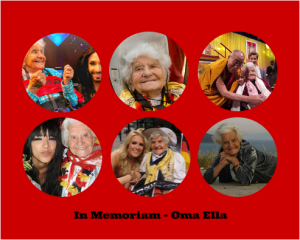 In Memoriam – Oma Ella passes away at the age of 105 years young.

If you are a fan of Eurovision and have travelled to the contest then you will deeply saddened at the news of the passing of Oma Ella.

She may have been 105 years of age, but she was the most enthusiastic fan of the Eurovision Song Contest. Decked out in the flags and colours of Europe, she attended the contest and was a beloved member of the fan community.

Her passion for the contest never diminished and she was an inspiration for others. She said one of her highlights was meeting the Buranovskiye Babushki from Russia at the contest in Baku. This video is for you Oma.

Many of us had the pleasure of meeting Oma at the contest. She certainly was the embodiment of #BuildingBridges between the Old and New Eurovision Fans.

Did you meet Oma? We hope you did as she was one very special woman who will be sadly missed. Our condolences to Oma’s friends and family from the team here at Eurovision Ireland.