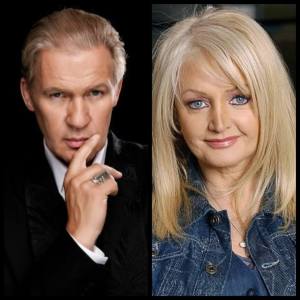 Who knew that the small town of Halden would be the setting for a sing off between Eurovision Legend Johnny Logan and 80’s Diva Bonnie Tyler.

Johnny Logan performed live for an outdoor, live, sing along TV program in Halden, a border town between Norway and Sweden. He sang “You Raise Me Up”, the global hit, composed by  double Eurovision Composing Winners Rolf Løvland (1985 and 1995) and with lyrics by Brendan Graham (1994 and 1996).

It wouldn’t be a Johnny Logan performance without the tight jeans and leather jacket. But his voice is sounding better these days than ever. The final note of the song will have Mariah Carey quaking in her 8 inch heels. The audience seemed to like the performance and you got to feel sorry for the woman who the tv cameras zoomed in on as she was crying to Logan’s performance. Logan still has his mojo!

Next up we had Eurovision 2013 UK representative Bonnie Tyler. Now as a football manager would say “it was a game of two halves”. First up was Tyler’s monster hit ‘Total Eclipse Of The Heart’ that was good. Accompanied on vocals by a young gentleman that has a voice like velvet – get him to Eurovision please. Tyler was like an American presidential candidate walking through the audience hugging any child – whether they wanted to or not. However the performance was not that bad. A classic song still today.

Now is where it gets interesting. Tyler sang the anthemic ‘Holding Out For a Hero’. One of my favourite 80’s songs. Not sure if Tyler forgot the words in parts or was just tired from running another lap of the audience and screaming the song to onlookers while being 2 inches away from them. But hey it is Bonnie Tyler and she can sing or scream when she wants! See for yourself.

So who sang best – Logan or Tyler?

Tagged as: Bonnie Tyler, Eurovision, Eurovision Winner, Holding Out For a Hero, Ireland, Johnny Logan, norway, Total Eclipse of the Heart, UK, united kingdom, You Raise Me Up