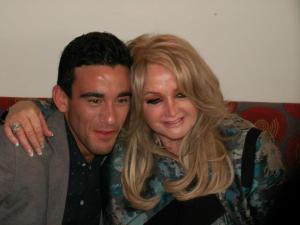 Tuesday May 14th at Eurovision 2013 in Malmo – so what is Eurovision Ireland up to today? At a glance we have already had 2 interviews today – that we will post later. One with Bonnie Tyler for the United Kingdom and another with the gentleman that is Gianluca from Malta – again interview to follow.

Elaine has been invited to the Georgian Embassy today for their official Delegation celebrations. Elaine and the site have been huge fans of the Sophie and Nodi for several months now and it is very kind of the Georgian Delegation to invite Elaine to their celebrations. Again we will have a full report on the event for you – but we can tell you that Elaine was presented with an official Georgian National hat and she has just sang “Waterfall” with Sophie and Nodi!”

Ryan Dolan from Ireland –  had a wonderful time last night with Irish Eurovision Winner Linda Martin at Euro Cafe – again we have the video and pictures to follow. Tonight Ryan will take to the Eurovision stage in Semi Final 1 at 9pm(CET) and if he puts in another strong performance like he did in the Jury Final last night, then we are very hopeful that he will qualify for the final. If that was not enough he has just released his EP – again we will let you know about that today.

Tonight we will be in the arena enjoying and cheering for Ryan and the other 15 countries. Fingers crossed for a great show and good luck to all the contestants