Malmö locals cash in on Eurovision 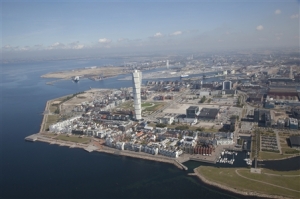 Malmo loclas cash in on Eurovision – Photograph courtesy of greentechvisits

Being a Eurovision host city can bring a financial windfall to the locals. Like in Baku the year before, many locals are moving out for the 2 weeks of Eurovision and renting their homes to fans and press who are looking for quality accommodation at a good price.

The urban population of Malmo is about 300 thousand and the metropolitan area has some 665 thousand residents – thus making it Sweden’s third largest city. With hosting Eurovision there was a run on hotels and hostels in the city. Some hotels have doubled their hotel prices for the Eurovision weekend where a basic room can cost you up to 2,000 SEK or approximately €235 a night.

Many locals have taken to undercutting hotel prices and advertising their homes on many sites like that of AirBnB where Eurovision fans have been snapping up the accommodation. Many people will be travelling to Malmo without tickets for the contest yet they want to soak up the atmosphere in the city.

AirBnB who are seeing a 4 fold increase in accommodation requests for Malmo and Copenhagen over Eurovision. Photograph courtesy of businessinsider.com

It is estimated that many Malmo residents can be making up to €3,500 by renting their home out for the week. That is a good investment and for the traveler it will be somewhat cheaper if sharing a house with some of your colleagues or friends. Aja Guldhammer Henderson, Head of Operations Nordics & Netherlands for Airbnb said that “Since Malmo was confirmed as the Eurovision host city the bookings for accommodation in the city has skyrocketed. Right now Malmö is record-breaking. We’re experiencing four times the amount of bookings for the city on Eurovision weekend than we do normally. In the last few weeks we’ve added over 100 properties alone as interest is so high”.

She went on to say that nearby Copenhagen is also seeing a spike in their market too for the duration of Eurovision, as it is a short train commute to Malmo. The nearby town of Lund in also experiencing a letting spike for the Eurovision period.

Red Apple Apartments is a service like that of AirBnB and they have fully furnished apartments for business travel to let on a day by day basis. “We started taking bookings at the end of last year for both Malmö and Lund. There has been a lot of interest, particularly from Spain,” Red Apple Apartments Supply Manager Suzanne Bachman said.

Their rates are approximately €100 to €130 per night which undercuts the hotels by over 50%. So if you have not got your accommodation sorted yet then these maybe of some assistance to you – and the locals