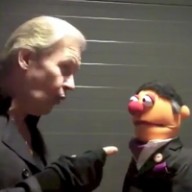 Europe’s Premier Eurovision commentator Terry “Euro” Vision, Senior Interviewer at ESC Insight had the pleasure of meeting Ireland’s Eurovision Legend Johnny Logan. The burning question on Terry “Euro” Vision’s lips was how did it feel to come second with his composition for Linda Martin in 1984 with the song “Terminal 3”.

As you can see our man was quick to challenge Terry “Euro” Vision and remind him that he has indeed won the Eurovision Song Contest 3 times and one of those wins was with Linda Martin in Malmo in 1992. However Terry “Euro” Vision was determined to get to the emotional side of Johnny’s defeat in 1984 like the true journalist that he is.

Would Johnny ever consider returning to Eurovision like Englebert Humperdinck. Probing questions from Terry “Euro” Vision got Johnny to admit that he would return to Eurovision as a composer though. And what country would he write for besides Ireland? Well you will have to look at the interview to find out the answer to that question.

These are the questions that all us Eurovision journalists should be asking. If you want to see more then make sure to check them out at their ESC Insight YouTube Channel. Thanks to our friends at ESC Insight – Terry “Euro” Vision and Series Producer Ewan Spence. Oh and they will be broadcasting from the “Eurovision In Concert” show this weekend in Amsterdam. Have your autograph book at the ready this weekend!