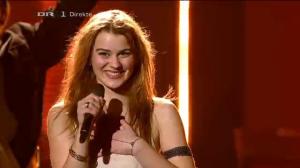 Emmelie de Forest not only won the right to represent Denmark at the Eurovision Song Contest in 2013 in Malmo but she is also number 1 on the Danish Download charts with her winning song “Only Teardrops”.

However that is not the only Dansk Melodi Grand Prix Song that is in the Top 10.

At Number 2 we find the runner up on Saturday night Mohamed with his song “Unbreakable”. All videos appear to have been removed from YouTube at present of his live performance.

And as no surprise we find Simone at number 3 with her song “Stay Awake” that also came 3rd in the contest.

It is clear to see that most of Denmark were tuned into Dansk Melodi Grand Prix on Saturday night.