SPAIN : Are Auryn Preparing to Make a Eurovision 2014 Statement? 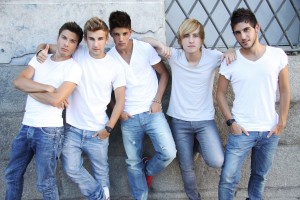 Spanish media is going into overdrive now looking for confirmation on who will represent the country at Eurovision 2014. Ruth Lorenzo took to Facebook to “allegedly” rule herself out of the contest for 2014 though several Spanish fans still believe she could be selected – according to their social media updates.

However attention has turned to Spanish Boyband “Auryn”. They posted this very ambiguous tweet yesterday

In English this tweet reads “We greet you from @ tve_tve. Preparing things!” Some are speculating that they were there to finalise their Eurovision participation for 2014. However we also know that there was a Christmas Gala TV show being recorded at the TVE Studios yesterday and Auryn were on the list of performers.

What is interesting is that Auryn are on the Warner Bros Record label. The past 2 Spanish Eurovision Acts have come from Warner Bros too. We also know that the band has re-released their last album with a special edition. They were runners-up in the Spanish National Eurovision Selection in 2011 but have said on previous occasions that they would not consider Eurovision again. Has this changed?

Two other acts have declared that they would like to enter Eurovision – Roser and Chenoa. Roser has a high profile in Spain as a singer and more recently as a talent show judge. Chenoa – former Idol singer has said explicitly that “”I’d go back after being backing singer for Rosa . The festival brings more good than bad”