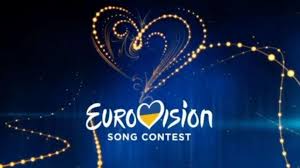 Ukraine’s search for a third Eurovision winner continues tonight, with the second semi-final of Vidbir 2018. If you were watching last week, you’ll know there will be plenty of ad breaks, as well as the gap between the songs and the results. But bear with us – it’ll be worth it.

You should know the drill by now. Hit refresh to keep abreast of what’s happening. You can also watch the action HERE.

And we’ve started. Ukraine seems to be a country of many musical styles. So we get a rap about Portugal.

We get introduced to our three panelists again – Eugene, Andriy (aka Verka) and Jamala. They’ll cast their votes later on tonight.

It’s all very jolly. But then it’s onto the songs…

A soloist in foil is our Ingret. And purple underneath. There’s lots of yodelling in the Cranberries stylee. The song is two different melodies spliced together with a general fishy motif – judging by the backdrop. It’s all a little too much and yet strangely mesmerising at the same time. I don’t think it’s a qualifier because it’s just too mad. 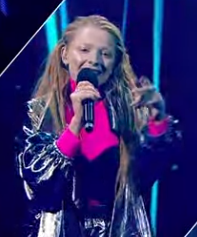 A male soloist this time. He’s singing in English and means business with this serious song. Serious yet upbeat with a pretty decent funky vibe to it. He does have backing singers but they’re very discreetly tucked away, in order to give him more time to give him room to discard his long trenchcoat and play the piano. This is very good and will be contender tonight I think. His look might even be enough, Just think Johnny Depp as Edward Scissorhands and you’re about there. 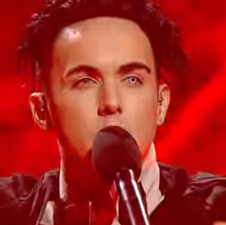 Back to a Ukrainian/English mix for someone who would clearly like to be Jamala. She wails a little, which works. And wears an oversized spiral pipe cleaner on her head. She would also like to be Kate Bush I think. Once the melody settles down, we can actually cut through to Julinoza’s voice, which is quite passable. However, the song sort of peaks about 90 seconds in, and then goes down hill a little. It ends with a whimper rather than a bang. 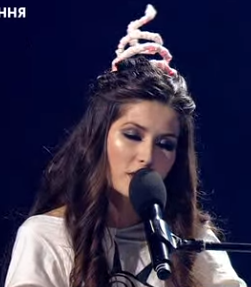 Ad break time.. But not for that long.

This is immediately funky. Tayanna has a group of singers and dancers with her, all in the same orange that she’s wearing. She’s already got the crowd going judging by the audience shots. Do you like uptempo and a song that grabs you, with a bit of east choreography thrown in for good measure? Then this could be for you. If you like a key change, even more so. Or a generous bit of thigh? Tayanna is giving us something for everyone with her very catchy little ditty. 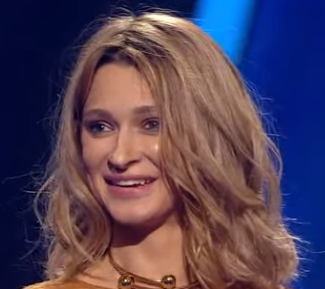 Kadnay – Beat of the universe

This year’s O.Torvald perhaps? But with fewer tattoos. The sound is a little rocky, with a bit of funk thrown in too. The English diction is pretty credible. For some reason, I like the way they share the singing. First it’s a guy in a black kilt. Then when he switches to jam with a drummer, the keyboardist takes over. It’s all very egalitarian. It also gets engaging when the two singers try that clapping and slapping dancing that’s popular in the Tyrol. It gets a huge cheer from the crowd. Perhaps it’s the novelty of a kilt. 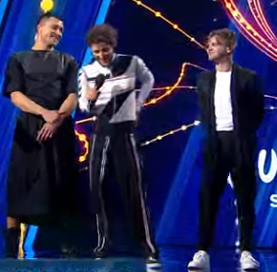 I’m getting a T.Rex vibe with the beat here. The are of course, not T.Rex, but a band in long coats and banners to give that Celtic-rock touch. The chorus is completely different to the verse, with long notes, an English lyric and a soaring vocal. It seems very marmite(r) to me which might count against it. And thorns wrapped around the lead singer’s mike stand. It’s unique but perhaps a little disturbing. 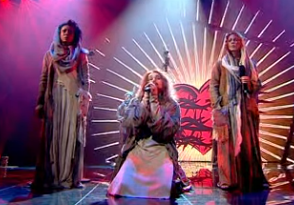 Ad break time… And we’re back

Mountain Breeze – I see you

Not quite a vocal boyband as they play their own instruments. I was expecting something upbeat, but this is gentle with more soaring vocals and long notes. It bounces along quite nicely and is in English too. Eventually the song builds into something a little more – dare I say – Scandinavian. Not a bad thing, if it were to get through to Lisbon. There’s none of the two-minute-song-stretched-out here and this could be one to watch when the votes are called in later. 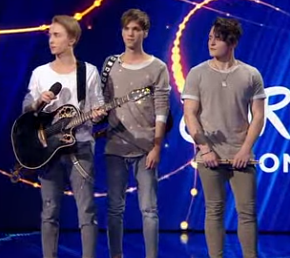 We’re ethnic with more wailing and Ukrainian instruments. Not so much a song, it’s more a chant in parts, which might appeal to the purists out there. The tune is there, particularly for the chorus and the chanty bits. For the verse Illaria switches to English and is trying to emulate Jamala. The most Ukrainian thing we’ve seen tonight, and could tick all the right boxes for the domestic audience. 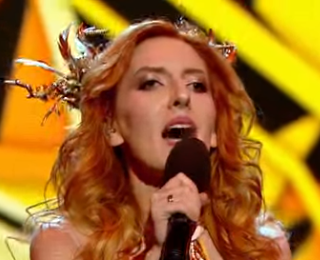 Our final (five-piece) group like colours. Even the one in the pink dog mask. They also like checks and dancing a lot. This is definitely a party track that seems heavy on a catchy melody and gimmicks, but not quite the same on profound lyric. Thetre’s rap, a shopping trolley and a kennel on stage too. If I wasn’t in the Vidbir groove, I wouldn’t have a clue what was going on. Rapping in Ukrainian seems a little clunky, but what do I know? A qualifier? I’m not sure. 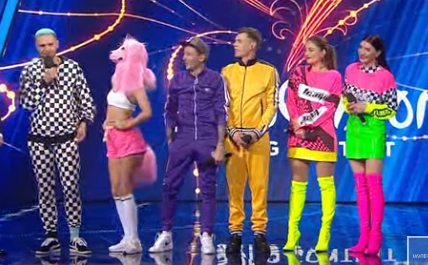 And that’s the songs. The Ukrainian public can start to vote, so we get a quick recap of tonight’s nine songs.

The results will be announced later on tonight. Don’t go away.

Woo-hoo! It’s results time. Which three of tonight’s acts will we see again next week?

But first, it’s Madame Monsieur. They’re representing France in Lisbon, but you knew that already. Black appears to be their outfit colour for every ESC event. The audience is standing up to applaud it. That’s a good sign. 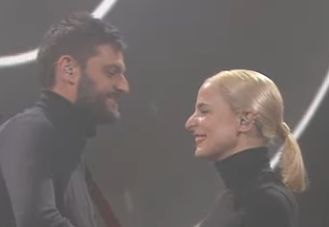 We’re getting all of tonight’s performers on stage. An interesting collection of outfits and looks. Sadly six acts will go away disappointed shortly. Or maybe not quite so shortly. Scores are being given out, but there’s lots of chat between them. 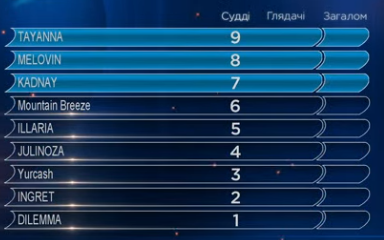 As you’ll know, our interview with Tayanna appeared this week. So things are looking good for her.

We’ll get the public vote after an ad break. Which we are.

Here are the public results, as verified by PWC (other verification services are available). 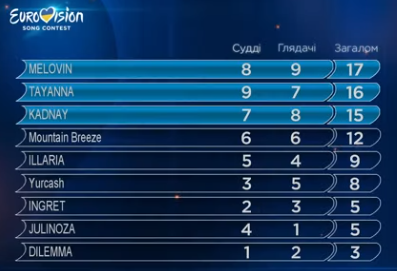 I hope you enjoyed the show. We’ll see Mélovin, Tayanna and Kadnay – and hopefully you too – next Saturday!