Today the ‘Head of Delegation’ meeting is taking place so we thought that we would bring you the details. Already some big news and a first look at the stage! Just refresh the page throughout the day for more news as it happens.

The Heads of Delegation are meeting in advance of the Junior Eurovision Song Contest this November from the sunshine island of Malta.

16 countries will participate at Junior Eurovision 2014. This is the biggest number of participants in the contest in 7 years. Congratulations JESC team. A lot of hard work has gone into getting so many broadcasters to commit to the growth of the contest!

So who do we have? 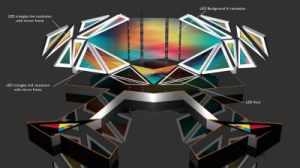 The stage brings some Italian style to the contest. It is designed by Claudio Santucci, of Milan-based company Gio’Forma. The concept for the set is origami, inspired by the triangle of the Junior Eurovision logo

“It’s a very flexible and easy to use shape.The ancient art of Origami shows us how something simple can be transformed into something much more complex with just a little patience, practiced, and understanding. Our origami set is, therefore, the blank canvas on which the delegations can tell their story”

As size is everything then let’s talk dimensions!

Overall, there will 508 square metres of LED used in the stage. The stage design features:

My origami swans NEVER looked as good as this!

You are spoiling us!

Accreditated Press will be very well catered for in Malta this November – Well think you very much in advance of our arrival!

Getting around Malta – again thank you JESC and PBS!

These volunteers will be getting interactive like never before at the contest!

Volunteers Get Interactive at JESC 2014

The postcards to introduce each of the countries will not be your normal postcards. They go #Extreme – Extreme Sports to be exact and me on my bicycle with no knee pads does not count!