Former Irish Taoiseach Albert Reynolds died today in Dublin. He led the country during the 1990’s and was a nominee for the Nobel Peace Prize for his work on the Peace Process between Northern Ireland and The Republic of Ireland.

Today tributes came in for the former Taoiseach and one was from Eurovision winner Paul Harrington who won the contest in Dublin in 1994 with Charlie McGettigan and the song ‘Rock n Roll Kids’. 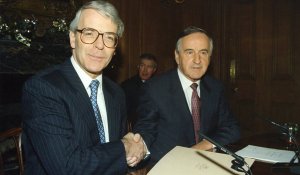 Paul spoke to RTE presenter Joe Duffy of his stories of the night of winning the Eurovision song contest back in 1994 and how the then Taoiseach Albert Reynolds helped him get to Brussels 3 hours after winning the contest.

You can listen to the radio interview HERE – forward to 1 Hour and 13 minutes for the Paul Harrington interview.

Albert Reynolds is survived by his wife Kathleen Reynolds, their two sons, five daughters and grandchildren.Our thoughts are with the Reynolds family.

Source : RTE and The Journal