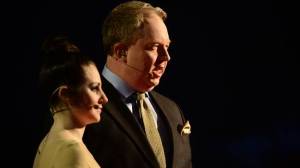 Sweden – Welcome to our live rolling blog for the Fifth Heat(Andra Chansen) of Melodifestivalen 2014 aka The Swedish Eurovision National Selection for Eurovision 2014. Just refresh the page for our live commentary on the show from 20:00 (CET). You can watch the show with us HERE on the SVT Play and tell us if you agree with our thoughts

Andrew James Main is here once again  with more thoughts on all that is going on in Sweden.

The show comes from Lidköping but I am once again watching from Gracielands near to Edinburgh.

The eight artists who came 3rd and 4th in previous heats will battle it out for the two remaining spots up for grabs in the Melodifestivalen Grand Final next Saturday. The 8 will be reduced to the top 5 after the first vote, then the top 4 after another voting period. Then we will have a dual between the 1st and 4th place and also 2nd and 3rd place to decide the qualifiers.

At the top of the article is a photo of our two lovely hosts Nour and Anders who once again introduce the show.

We have an opening act that involves lots of fire. Fire swallowers fire acrobatics and a heavy rock soundtrack.

So onto song number one tonight. We are introduced to the group with a chat behind the scenes with Nour.

Its the a solid heavy metal song that starts us off. Motorcycles on the stage and the drummer has his top off which

appeals to this audience in Gracieland,  this is a catchy solid performance for its genre and may stand a chance

Song 2 sees Linus who is heavily tattooed and pierced all over. He starts the song on an island in the middle of the crowd.

Good effect on camera and the build up of the song is also good. he then walks along a catwalk towards the stage

where he then appears at the main crescendo of the song with a backdrop of brothers.  This is a perfectly nice song

but feel it may not quite make it.

Now song 3 is a lot more fresh and modern and really catchy. Two girls and a guy really give this lots of visual energy.

This is my favourite of the night  so far. The vocals are occasionally slightly off pitch but overall a strong performance.

I think this will be in the mix for the final.

popular with the audience in Sweden.  He makes use of a megaphone part of the way through.

Overall a bright catchy and memorable melody which will hook a lot of votes methinks. Also in the mix. 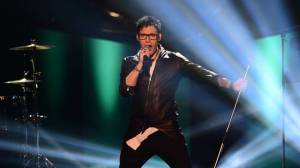 Song  5 is the one I least expected to see here tonight. Ellinore has a sweet little ballad performed very

simply indeed, She is once again in the awful blue dress and the performance is very static.  It makes use

of lots of sweeping camera angles for its impetus.  Her vocals are actually a lot better than they were last week

but still not perfection. I would be shocked to see this in the top 4.

Song number six sees the rather hot Martin Stenmarck performing. It is a slow starter but a real grower.

Once it does get going along with the spotlights in the background it really does hit the spot.

Overall a polished and confident performance from Martin who has the whole audience waving red hankies.

I am sure that is code for something in Sweden. Well done Martin. 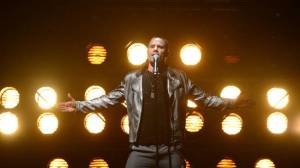 Former Eurovision winner albeit for Greece returns for another shot at stardom. This has been heavily backed

by the pollsters and for good reason. Its a lovely moody pop song with a catchy and instant chorus, perfect

Eurovision fodder to be fair. She also looks and sounds good throughout and I am sure this must stand a strong

Last but no means least is the outrageous  Outtrigger. Cages  and masks and a great schlager death metal song.

I just love this song its well staged and sounds good, it has its scary vocal moments that just add to the effect.

with lots of hair and guitars. Fab stuff and really hope to see it in the final. 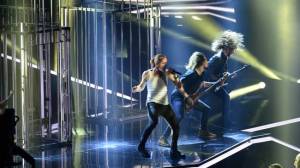 We have our smallest gathering tonight here at Gracielands but a definite set of prediction results.

We have JEM and Helena Paparizou joint 1st.

We have Outtrigger and Martin Stenmarck joint 3rd.

State of Drama are 5th with us then its Linus Svenning, Ammotrack then Ellinore Holmer last.

We have Tiffany on during the interval the lovely ‘sister; of Anders our host.

She goes to the green room to chat to some of the artists. Quite hilarious. 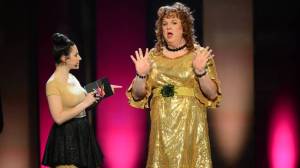 Song 4 is through(State of Drama)

and finally Song 2 is through (Linus)

So JEM are out who were one of our favourites.

There was a problem with their voting graphics so a slight delay till it is fixed.

the places in the final.

While we wait for the next we are introduced to Emmelie De Forest singing Rainmaker her new single.

She is accompanied by 3 hot male semi clad dancers and one female dancer and 2 backing singers.

She then gives us a piece of Only teardrops. 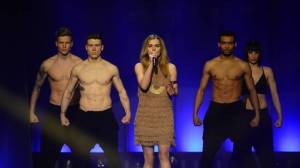 So now have a result.

The first song in the dual is Outtrigger who will be up against Helena Pararizou.

Both songs are performed again. Both give excellent performances. This could be very close.

The second dual is between Linus Svenning and Martin Stenmarck.

Both songs are also performed again. Poor State of Drama are out.

Another pair of good performances here, I think Sweden have chosen 4 good but different songs tonight.

This is going to go right down to the wire.

The first song through to the Final is Helena Paparizou.

The second song through to the Final is Linus Svenning.

Two great songs get through and amazingly both songs were in the 1st Semi Final.

Did you think the right songs got through?

Tune in next week for a great Melodifestivalen grand Final. Thank you and good night.