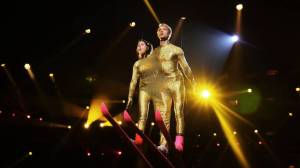 Sweden – Welcome to our LIVE BLOG for the third Heat in Melodifestivalen 2014 coming from beautiful Göteborg. The show begins at 20:00 CET and just refresh the page for our updates as we give you more than a one line comment – “Cause you’re worth it”.

Tonight you are in the capable hands of Andrew James Main (and a party of friends) who will give you their take on the show and give their predictions for the winner.

Eight acts compete for 2 places direct to the Grand Final and then 2 acts for the Second Chance Round in 2 weeks time.

with a bunch of the usual suspects to review tonights songs. We start with a look back at last weeks

show and then our hosts come to the stage to a rousing reception. Anders in a dress(yes a dress)

and our lady hostess in a suit.

Song 1 is from Outrigger with the song Echo. We have all the band in cages with the lead singer in a

mask, think Hannibal Lecter. This a fab piece of thrash metal or schlager metal as we are calling it here.

Its highly catchy and a great start to the show. The vocals are at times scary but highly appropriate for

this kind of style of song. Fab start.

Song 2 is EKO with the song Red. Two of the composers are the same as in song 1.

We have a catchy piece of electronica music this time. The lead singer looks very like Toya Willcox.

A great voice with an operatic feel, also hints of Goldfrapp in this. This is a really good song too would be

a good choice to progress.

Song 3 is from Oscar Zia with Yes we can composed by Frederick Kempe as well as others.

This song won the exit poll at last nights rehearsal. Song starts with tv screens covering Oscar and the dancers.

Nice effect. The vocals were slightly shaky at the start but it does get better. Very Backstreet Boys style here.

We also get a key change which is so important in Euro land. A good pop song which will have the little girlies

Song 4 is Shirley Clamp with Burning Alive.  Shirley is on her own on stage and this song is vocally challenging.

But she is sounding good. It starts slow but picks up the tempo. Noticeably this song is getting no reaction or comments

from the guys here. A key change and a wind machine are used to good effect. I think its a really good performance 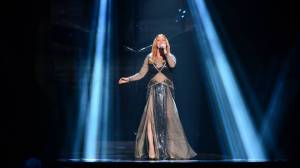 Song 5 is State of Drama with All we Are. Can these guys make the Final for a 2nd successive year?

Its very football anthemic at times. Its an ok song I suppose but not to my personal taste. The guitarists

are both quite dishy but perhaps I am distracted a little from the song. But nevertheless a good song. 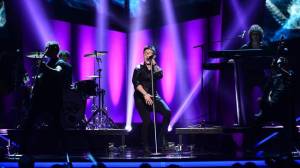 Song 6 is Cajsastina Akerstrom with a hauntingly slow ballad. A distinct country feel to this one.

She has a nice lower range voice.  Lots of glowsticks in the backdrop here(we know the Swedes love them).

It ends in a snow blizzard(remember Sweden like snow).

Song 7 is Ace Wilder with Busy Doin Nothing. This is preceded by a funny piece with Bjorn Gustafsson

on a hoist (remember he hosted a few years back and also read out the Swedish votes too.)

This is written by the same two who wrote songs 1 and 2.  Starts quite slow but really kicks into a good beat.

This is very modern at times. She is accompanied on stage by 4 guys in prison suits. A mixed reaction.

Song 8 Around the World presented by Dr. Alban and Jessica Folcker. A very obvious reggae beat to this one.

Jessica is great but Dr, Alban is pants and so out of tune. The have 4 backing dancers with them on stage.

This reminds me of Gemini from the UK in Riga its so bad. I am sorry guys but this should be last if there is

any justice around the world.

We are presented with Sochi The Musical. All the dancers are dressed in gold leotards.

This is soooo bizarre, playing on the gay elements with lots of pink trim.

A lot of the musical is using elements of Bohemian Rhapsody.

It ends with Skijumping for Siamese twins(see pic at the top of the article).

Our prediction here at Gracieland was Shirley Clamp and Oscar and EKO joint 2nd.

Joint 4th were Outrigger and State of Drama.

Dr. Alban and Jessica got the lowest vote of all songs in the last 3 weeks.

The top 5 are as follows

Song 5 All We Are

Song 3 Yes We Can

Song 8 Around the World(they are having a laugh!)

The first song direct to the Final is Yes we Can sung by Oscar Zia.

We get a reprise of his song.

The second song into the Final is Ace Wilder with Busy Doin Nothing.

The first song to the second chance is Echo and Outrigger.

The second song is All we Can and State of Drama.

Thank you for following the blog. Did you agree with the result?