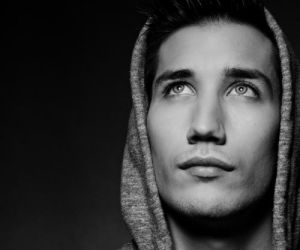 Hungary – Welcome to our LIVE BLOG for the First Semi Final of A-Dal 2014 as Hungary searches for their Eurovision 2014 representative. The show begins at 20:25 CET and just refresh the page for our updates as we give you more than a one line comment – “Cause you’re worth it”.

Tonight you are in the capable hands of John Stanton who will give you his take on the show and give you his predictions for the qualifiers for the Grand Final.

Nine acts compete in the first semi-final of A-Dal 2014. Two songs will be selected by the Jury to qualify for the Grand Final and then the remaining acts will be decided upon by the public tele-vote.

First up is Mystery Gang. With enough Doo Up feel good Elvis hip shaking going on – they were an energetic start to the show. Jedward are feeling worried as these guys have quiffs bigger then theirs. Not content to just play the double bass they felt the need to hand and jump from it. 10/10 for the effort but it falls into the category of a tribute act for me. Rock a Billy totally but nothing new to add to it. This style of music has not scored well at Eurovision and I doubt it will score well tonight – unless you are from the Hungarian Elvis fan club or hitched a ride with Michael J Fox back to the 50’s in his DeLorean Car.

Now we are not doing a TLC or a Sophies and Nodi cover but we are onto Joni. This is a belter of a Ballad and Joni can sing the socks off this song. She is the type of girl that does not intimidate on camera but draws you in. Great backdrop in the song especially when you come to the chorus. Simple, Elegant but not a sign of a Ball Gown anywhere. This had the audience in a frenzy of applause and rightly so. Let the competition begin. My pick for a Grand Final place. “Don’t Go Chasing Waterfalls” you go for it girl!

Viktor Király – “Running out of time”

Viktor takes to the stage with his upbeat, slightly rock-a-billy look. There is a stage presence there and this comes across very slick. Our backdrop uses the 2013 effect of the words to the song. Just in case you wanted to singalong. It was a very good performance and the jury seems to like it too. He scores 39 from the jury.

Group’N’Swing sang song 1 in semi-final 1. They don’t seem to have lost their edge. They stay faithful to their Magyar tongue though to some it may seem a little wordy. But it is very vibrant. There’s also a very good use of the backdrops, with items on them appearing to be balancing on the band’s hands. The song scores 32 from the jury. 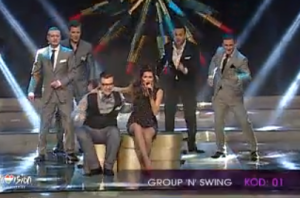 Before the next song, we go briefly to the Green Room so chat to some of the acts. The ones spoken to appear to think they’re in with a real chance of winning A Dál.

Young Bogi and her backing singers are back with her very downbeat-starting song (when compared with the previous songs). It starts simply with her sat on a box on a dark stage. Once the first chorus kicks in, we get a blaze of animal pictures, a lively guitarist and plenty of movement from Bogi. It’s catchy with a simply worded chorus that is easy to song along too. The jury give this song 38 points. 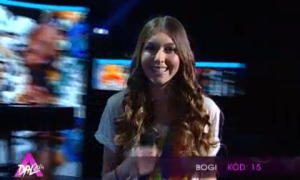 Straight into guitar riffs here, and if it gets to Copenhagen it would certainly wake up a few stupified viewers. Our lead singer has an authentic gravelly voice that suits the Eurovision style of hard rock. It’s also very catchy if you like your headbanging sort of stuff. The backdrop is simple – dark with bright vertical lines moving around. Depresszió score 34 from the jury. 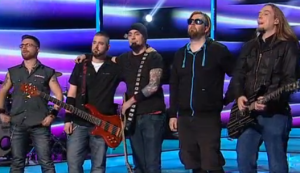 Leslie takes us down a tempo or two with his simple folksy song, which features just him on the guitar. He gives a very earnest interpretation and means well. Sadly he seems to miss some notes here and there. But it is a jury favourite, so maybe he’s just having an off day. He scores 35 from the jury. 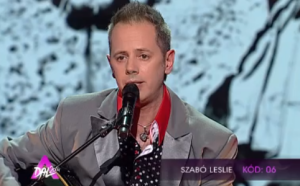 We now go back to the Green Room to chat to some more artists. They all still seem upbeat despite the numerous stages to A Dál and strong competition. It’s unclear what may (or may not) do well tonight.

Gigi appears to know the Eurovision market, judging by her interesting mix of backing dancers. Ans we have door sized frames. Haven’t they featured before too? It’s very very upbeat and unique amongst this semi-final. Unique enough to qualify for the final? Who can say. Gigi scores 32. 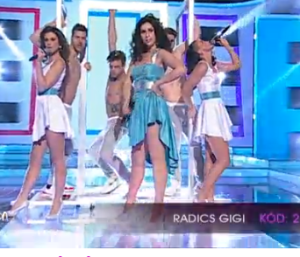 New Level Empire – “The Last One”

Our ninth and final song tonight has a very contemporary feel. There’s perhaps more than a little influence from Compact Disco about this. It’s very vibrant and instantly instantly catchy. It;s arguably the best performance of the night and came across as though it could be a very competent representative for Hungary. The song scores 36 from the jury. 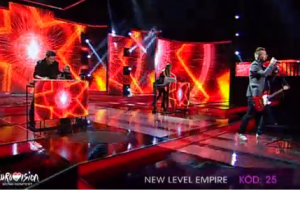 So after the jury votes, the scores are as follows:

Viktor Király and Bogi make it to next Saturday’s final, with the remaining seven competing for three public vote places.

We hear from ByeAlex in the Green Room. He picks the Mystery Gang to also go through tonight. We then see adverts for the A Dál 2014 CD – available in all good shops and on all good websites.

The interval is a treat if you’re Hungarian. Local legend György Korda performs on stage with heavily-tattooed rock band the Hooligans. This song “Lady N” is an interesting song that wouldn’t have been out of place in a 1970s contest.

We’re nearly there, and get a few final words from the jury before the lines close.

Viktor Király and Bogi – already safely through, come to the stage. They’re joined by New Level Empire and Depresszió! So the voters of Hungary appear to like contemporary and hard rock. I think they’ve picked well.

We’ll be blogging again then. Come back tomorrow night. And thanks for tuning in.

JURY QUALIFIERS FOR THE GRAND FINAL