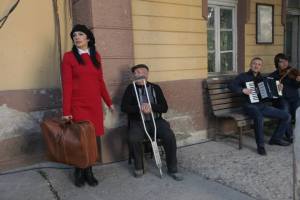 Kaliopi is back with her new song “Lokomotiva” that would certainly give Kylie’s “Locomotion” a run for its money. Kaliopi was one of our favourite artists both on and off the stage at Eurovision 2012. She brought Macedonia to the Grand Final at Eurovision that year and hopes to have just as much success with her new release in the charts.

If you are going to do an “Ethno-Pop” song then this is an expert class in how to do it. This song has a distinctive Balkan flavour running throughout it. From violins to guitars to an accordion providing the backdrop to the song – the inclusion of a bass dance beat does not overtake the song, but adds pace to this gem of a pop song.

You always know that it is Kaliopi singing with her distinctive voice. This song is like a runaway train that once starts, just keeps gaining speed. I will take a one way ticket as I don’t want to get off this “Lokomotiva”.

The song is composed and produced by Romeo Grill and the cute video that accompanies the song was directed by Ognen Sapkovski and filmed on location in Macedonia.

Hop on this train and you will certainly not want to get off. “Ethno-Pop” at it’s finest!