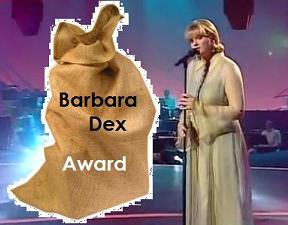 The Barbara Dex Award is voted by the public on whom they believed to be the worst dressed artists at Eurovision 2013. Barbara Dex represented Belgium at Eurovision 1993 in Millstreet, wearing an unfortunate dress that she made herself (see evidence above). The annual award for worst dress is housed by http://www.eurovisionhouse.nl/bdform.php

You have to vote for the worst dressed act up until May 25th at 23:59 (CET) – so have your say in the link above. There is a strong selection to choose from this year – which is why we love it! 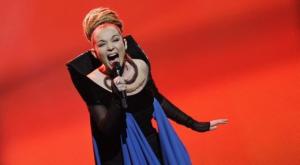 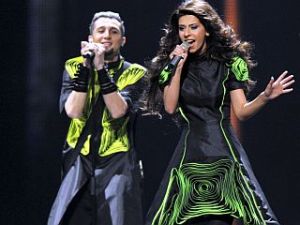 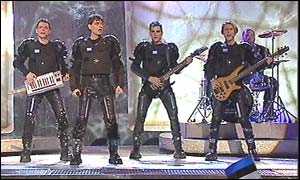 S.A.G.A.P.O. – Greek Eurovision Representatives 2002 and winners of the Barbara Dex Award. Picture courtesy of the BBC

2013 had it’s fair share of creative costumes from Serbia to Israel, but for once I think the presenters of the show should be included. We all loved Petra hosting this year’s contest but some of the creations she had were worthy of Douze Points in the Dex Charts – Your Honor I present the below evidence 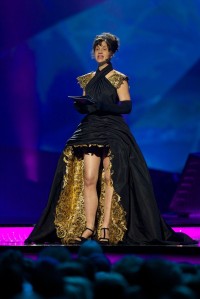 Well have your say and vote now! Who do you think deserves the “Barbara Dex Award 2013”?