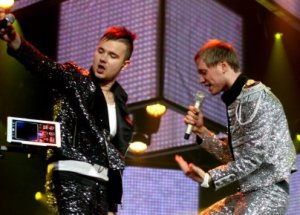 Per take to the stage again in the Malmo Arena for their 2nd rehearsal of their Eurovision 2013 song “Here We Go”.

Latvia’s performance is the same as it was in the first rehearsal. Arturas and Ralphs give their usual high energy performance with their sparkly suits. They better just hope that there are some burly fans down the front of the stage to catch them when they do the stage dive – imagine being responsible for dropping a Eurovision performer!!!! At least if it goes wrong it is at the end of the song as I don’t see them needing to be fully fit for Saturday as much as I love them and the song I cannot see it getting out of this strong Semi Final.

Latvia’s performance is the same at their first rehearsal but a lot tighter on camera. Great group shots of Groups “Per” and the guys look like they are having fun – a lot like us from Eurovision Ireland are Euroclub. The stage dive still takes place from the lead singer – they better strength test the fans at the front of the stage to ensure this is not a floor dive of epic proportions. This song will come alive with the live Audience. Personally I think this is in the final for sure. We need to keep this party alive

This is pretty lively and actually is a good opener to the 2nd Semi. Lots of sparkly silver suits and movement on stage. Especially like the crowd surfing moment but wonder if the real audience will be trusted to do that. Vocally it sounds perfectly fine too but I cannot help the fact I really dislike this song and it’s still not hitting the right place for me, it’s a non qualifier for me.

Valentina is still putting in an assured performance. She sings brilliantly but I just don’t like the staging with ball. The performance is the same as first rehearsal and although this is a much better song and performance than last year I fear this may not get out of the semi. Esma and Lozano from F.Y.R. Macedonia are on straight after them and I think their song will overshadow the dance part of Crisalide. Everyone wants her to qualify but i think she may just miss out.

This looks really good and is sounding great. Love the transformation from slow to fast song with a dress change, well more a remove cloak change. This totally deserves to qualify as it’s a really good performance and hope that it does as it will get a big cheer on the night.

I am torn on this one now. Before the contest this was one of my favourite songs and I had it in the Top 5. Vocally Valentina is emotive, expressive and pitch perfect. What is the problem then I hear you say? The presentation is very high brow – and I am not talking Lithuania “Eyebrowography” (thanks Elaine for that one) – but the San Marino presentation is too conceptualised and will leave the viewing audience confused and maybe cold. I am still not happy with Valentina in a red dress against a red backdrop – she gets lost on the stage. I love this song but not the presentation – this is borderline now for me.

Lozano has reverted back to singing in Macedonian but I much prefer it when he sings in English. What an entrance Esma makes in a bright red flouncy frock – (ooh i’ve been waiting to use the word flouncy since i got here). The dress is fantastic and she is fantastic. I think this will qualify as it is more memorable than the first 2 songs of the semi although I feel it would have been a more certain qualifier with the English lyrics.

Now this is not very high on my list of likeable songs this year but the performance today is really much stronger than I expected. Ezma’s scarlet dress is just fab. I think it works much better in it’s original Macedonian which they sing in today. This has moved from my non qualifier pile to the borderline one.

I am loving the song now even more than a wind machine on a Melodifestivalen stage. Lozano is singing in Macedonian – which I think he should change to the English version that he experimented with in rehearsal one. Trumpets please as the Gypsy Queen that is Esma comes to the stage. Diva extraordinaire is not enough adulation to heap on this Goddess. I love her and the tone and depth that she brings to this song. This has a chance of qualifying now and could also make San Marino seem somewhat dated.