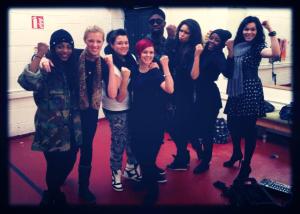 Literally this photograph was taken 20 minutes ago here in Dublin and it is Zoe and her team in rehearsals. You will see some Eurovision and Eurosong favourites there – Donna McCaul, Nikki Kavanagh and Claire O’Loughlin – who will all be providing backing vocals to Zoe this Friday at the Eurosong Final. Also pictured is Lauren White one of the composers of “Fire” along with Niall Mooney and Willie Weeks.

As you all know Zoe performed at “The George” on Saturday night to rave reviews but you did not get to see her awesome “Dance Break” performance that she did with her 2 amazing backing dancers. You have to see this as the crowd went wild” 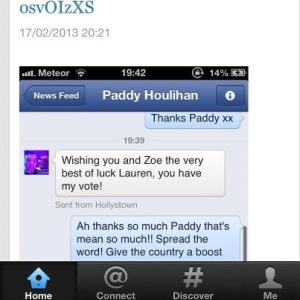 So it is strict rehearsals for Zoe between now and the Eurosong Final. Zoe will perform song 3 “Fire” at the Eurosong final this Friday 22nd on the Late Late Show on RTE1

The Girl can definitely move – Any chance of a lesson Zoe?