#SAN MARINO: Valentina’s back to sing in Kyiv! 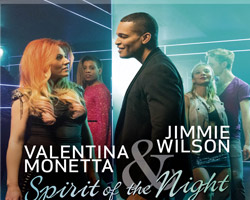 #SAN MARINO: Valentina’s back to sing in Kyiv!

San Marino has revealed that Valentina Monetta is back – again – to try for Eurovision success. This time, however, she will be duetting with Jimmie Wilson. The song will be called ‘Spirit of the night’.

Valentina needs no introduction, save that she’ll be one of a very small number of performers to sing four times in Eurovision. Jimmie is a veteran of stage, having starred in the musical ‘Sisterella’, and as Barack Obama in ‘Hope’.

The song has been written by Ralph Siegel, Steven Barnacle and Jutta Staudenmayer.

HERE‘s the video on SMTV’s website, along with the lyric.

What do you think of it? Do you think Valentina and Jimmie will make it out of the semi-final?