Portugal tonight chooses its song for Kyiv, after a year out in 2016. Sixteen songs have been whittled down to eight, but only one can win. Who will it be? Tune in to the blog from about 22.00 CET as John gives his views that you might either agree with or not. Tell us what you think.

But what are the eight songs, John?

Follow us from about 22.00 CET/21.00 GMT for the LIVE BLOG. You can also watch the action via RTP’s website HERE. It’s likely to last four – yes, four – hours, so make yourself comfortable.

The winner will be chosen by a combination of televoting and regional juries. Will we get the controversy we’ve had elsewhere when the result is close? Or will we have a clear winner?

Our presenter Filomena is among a number of people mooching in a lobby of the venue, along with some people dressed very oddly. Not to be outdone, her co-presenter Catarina is with odder people.

We move to the studio, fronted by Tiago. He’s got the good gig on stage, and knows lots of previous Portuguese songs: Playback, Bem-bom, Chamar a música, Ele e ela.

Back to Filomena, and she’s only with Simone de Oliveira, who’s looking well (she’s on the left).

There’s a chap on the red carpet behind Catarina wearing several broken mirrors. I hope this doesn’t mean many more years of bad luck for Portugal.

We open with a count-up, from 1964 to 2017, with a troupe of chaps with big illuminated drums. It’s more an ESC semi-final interval act, but it’s OK. They introduce Silvia and a different Catarina. They seem to be running the show. 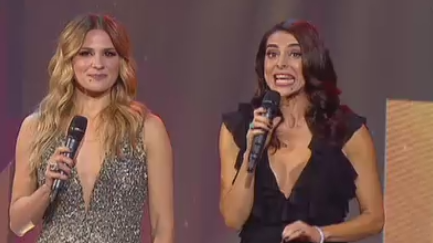 We now get run throughs of the acts, with the numbers for the Portuguese voting public to call. Salvador, Primavera and Viva La Diva seem to get the biggest cheers.

We’re now onto the songs. Typical postcards of the acts talking about themselves precede them.

He’s in the same jacket from his semi-final, which is a statement in itself. It’s a quirky little number, full of broght colours in the background. It’s an OK opener to the contest, and gets lots of applause. Whether it’ll do anything remains to be seen.

Pedro looks very young, and here’s a novelty for FdC – it’s in English. He’s gone for the dramatic song that would suit a boyband better. He gives it plenty of effort and the two backing dancers – clad in red – do their bit too. Overall, it was obviously good enough to make the final, but I can’t see it winning.

Lena is a lady of more mature years and loves singing. You can tell by her immediately happy demeanour. I’m not sure about the song. It’s a little wordy and I think there might be issues with the sound. On the plus side, it’s a very jolly little song with a very animated band backing Lena. On the whole, I like it. But it ain’t a winner.

There are already big cheers for this chappy, and it’s good to see he’s recovered from his hospital scare the other week. Salvador makes singing look so easy, and there is applause during the song. His dress sense is quirky to say the least, but he absolutely nailed it, and I got goosebumps. The best by a country mile so far. 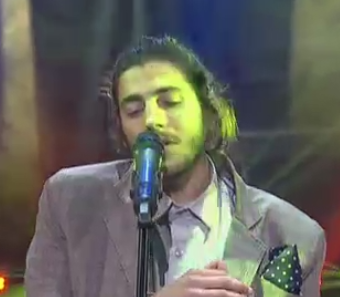 We have our first local stringed instrument, accompanying Fernando. He’s an earnest performer, and this is a serious song that has been done before – with some success – by Portugal. The key changes work well and the vocal is very clear. I’m not too sure whether the change in tempo works that well, but it could still be in with a chance of challenging for a win. There is a lot of applause.

This is another song with local overtones. Celina is bedecked in red flowers and carries an accordion. It starts slowly, before getting into an almost polka beat. It’s bouncy and you can hear the crowd clapping along. There’s nothing wrong with it as a song, but it’s perhaps the sort of thing Portugal needs to get away from if it wants to well in a wider European competition.

Deolinda is resplendent in a big silver-grey dress. She performs this ballad with a lot of heart. It’s emotive and not a bad listen, and she gives it lots of smile and enthusiasm. Never a bad thing to mean what you’re singing. She has a darn good voice, and there’s lots of applause at the end. 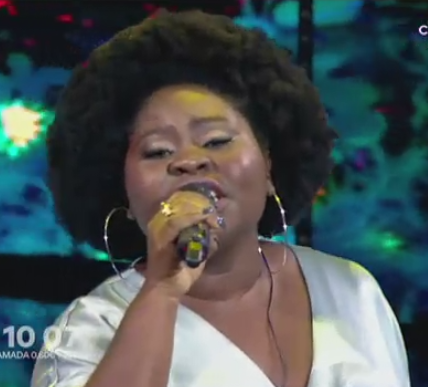 Finally, we go all big ballad with lots of strings in the popera stylee. I know it’s been done before, but it’s a very odd song. The two gents try to out-falsetto each other while the lady hold it all together. Some of the crowd are on their feet at the end, and perhaps Salvador and Fernando have a challenger. It’s not my thing but who knows.

It’s nostalgia time at FdC. Lots of talk from the vaults of RTP and the occasional clip. Dai-li-dou (1978) gets aired. As do various FdC songs that never made it out of FdC.

More recaps, and an extensive ad-break. You’re not really missing anything.

Time for a bit of cabaret. We get the Overnight Sensation Soul Orchestra playing the theme from Star Trek. I’m not sure why.

Next is a tribute to Tózé Brito. He’s a renowned songwriter in Portuguese circles. He co-performed ‘Dai-li-dou’ and co-wrote ‘Bem-bom’ and ‘Penso em ti eu sei’. An absolute legend.

We’re still here. There’s a lot of chat. I did say it would be a long night.

After a quick medley of clips from RTP, we all get to applaud Nicolau Breyner, who died in March 2016. He was a renowned actor and director. The clips of his life get a standing ovation.

We’ve had more adverts. And now more cabaret. No sign of any voting yet. But we get a resumé of major events in Portuguese history over the last 60 years.

It’s midnight and appears that the phone lines have closed. We’re definitely getting there.

We get a tribute to people that are no longer with us, with one word to sum them up…

After much talk and tributes – after all, it is the RTP 60th anniversary gala – we might be getting down to some results.

It’s time for the results of the regional juries…

The overall scores get converted to the points 12 down to 3.

And now the televoting points get added in…

The scoreboard disappeared, but Salvador Sobral scored 10 points, giving him an unassailable lead.

And ‘Amar pelos dois’ wins the ticket to Kyiv!!!

I think it’s a good choice. But what do you think?