Following on from last weeks article highlighting some rather impressive Eurovision tattoos that fans have had inked into their skin (myself included!) So being Eurovision Ireland’s resident tattoo lover, I thought I’d have a look at some of my favourites tattoos we’ve seen on the Eurovision stages.

Starting with Guy Sebastian from Australia, who has the most beautiful Phoenix tattoo on is left arm and shoulder. The phoenix is a very popular tattoo (I have one too!) and is usually a statement piece to indicate a triumph over difficult circumstances. Usually I am not keen on colour tattoos but this one is just so gorgeous and the colour work so good that it really is a beautiful piece of art.

Ruth represented Spain in 2014 and it would be hard not to notice her bold lettering tattoo on her right arm. The letters say ‘The Raspberry Pattern’, which was the name of Ruth’s band and the album they recorded but she had the tattoo done before the band was formed “I’m dyslexic and I love numbers.” she explained in an interview, “it turns out that raspberries have a random pattern and they are each as random as the universe. So I got the tattoo and then I thought it would be great as a name for a group”. 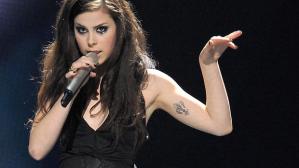 Try as I might to find any information about Lena’s tattoo on her inner left arm I’ve struck nothing, but I’m including it because I like it very much. It’s a simple fleur de lys, in black with some shading and I think it’s really, really pretty and if there is an explanation and a meaning to it for Lena, I have yet to find that out! 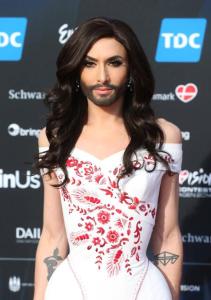 Of course I have to include Conchita, as you saw from the last article I wrote I have her beard tattooed on my wrist and she also has tattoo’s, three in total but the one I’m speaking about it the rather odd geometrical shape on her inner left arm. It is actually three letters, stylised and then mirrored. The letter are AHS – the initials of her parents and her brother. Here’s the video for ‘You Are Unstoppable’ which I’ve included because there are some great tattoo shots in it! 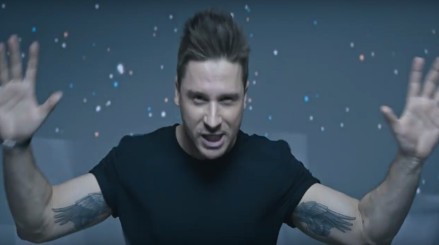 Coming to the stage in a few weeks time… Now I’ve gone on record as not being a huge fan of this song and have been shot down in flames from all sides for saying so, however one thing Sergey does have is a couple of really cool tattoos. Sergey has wings! Check out those bad boys! Now I’m pretty sure that most people watching the video for You’re The Only One are looking at Sergey’s handsome face and very impressive six pack, but I’m more in to the ink than the boy wearing it – oh and in case you’re wondering this song is growing on me the more I hear it and see if performed – by the time ESC comes around, maybe Russia will have made it into my top ten!

And now for the fakers! – those that looked great but sadly were not for real…

Aminata from Latvia may have sported a stunning owl on her chest visible through the black mesh of her dress, but this was nothing more than a temporary piece of art for the contest last year.

Well they made it look real by going to a tattoo studio and having some pictures done with a tattoo artist, but these too are not real, still we love Jedward for entering into the spirit of Eurovision ink and sporting the Eurovision logo for a while!

I do love some Henna work, it looks really pretty and I do love the designs that Molly sported for Eurovision 2014, and the great thing about Henna work is that it’s kind of like the ‘out’ version of a fake tattoo, it’s not hiding pretending to be something that it’s not – it is Henna and it’s beautiful!

Who’s tattoo’s have you noticed at Eurovision, let us know your favourites in the comments section below or on our Facebook page.