A few days ago there were a lot of posts across Facebook about the potential of Russia being the host nation for next year’s Eurovision Song Contest. With Sergey Lazarev and ‘You Are the Only One’ still leading the list of the Bookie’s favourites, Russia are going into 2016 as the favourites to win.

Like every song there are those who love it, those who think it’s OK and those who think it’s awful – if you’re interested I put myself in the middle of those groups, there’s nothing wrong with it, but I find it a bit of a bog-standard cheesy piece of pop, that will need outstanding staging and performance to lift it beyond that, there is definitely far better in the contest (but that’s just my opinion!)

Like I said, the discussion was not around what people think of Sergey’s song, but about what happens in 2017 if Russia win. There is already talk of demonstrations, boycotts, ticket sales and politics as the fans of Eurovision can see very clearly what is coming.

Russia has a pretty impressive Eurovision record having participated in 19 contests, so far they have amassed two 3rd places, four 2nd places and one win in 2008 when Dima Bilan represented Russia with the song ‘Believe’.

So the contest arrived in Moscow for the first time, and many fans made the journey from all over Europe to one of the largest contests in ESC history. There were already signs and rumbles back then of the way Russia and it’s treatment of LGBTIQ people was heading. Moscow Pride (yes, there did used to be one) was organised for the day of the final (16th May) The parade was denied authorisation by Moscow officials on the basis that it would destroy morals in society and statements were issued stating that protesters would be treated toughly and that “tough measures” would be faced by anyone who decided to join in the march. Many artist spoke out against this, including that year’s winner Alexander Rybak, who declared the contest itself the “biggest gay parade”.

Since 2009 LGBTIQ rights have seriously deteriorated in Russia. In 2013 the Propaganda Law was signed by Vladimir Putin and was approved by 91% of the Russian population in a poll. Many activist and critics responded by saying that the broad and vague wording of the law, made it incredibly and deliberately ambiguous and open to all sorts of interpretation. It could easily be seen now a crime to publicly make statements in support of LGBT rights, hold any sort of parade or demonstrations, state that any homosexual relationship is equal to a heterosexual one, or to  even display any recognised symbol of the LGBTIQ community, such as the rainbow flag or any of the other pride flags and it would be illegal to kiss a same-sex partner in public.

In 2014 The Tolmachevy Sisters represented Russia and they received the force of opinion from the audience in Copenhagen at both their semi final and final performances and when they were awarded points in the voting, the loud booing was so obvious from the crowd, this was attributed to the treatment of LGBTIQ people in Russia and partly the political situation in Ukraine at the time.

At the 60th Anniversary Conference in London, Pernille Gaardbo the Executive Producer of the 2014 ESC shared about how she comforted the distraught girls following that incident. It troubled the EBU so much that ORF employed anti-booing technology the following year in Vienna so that the sounds of any audience booing could be removed from the broadcast. It was Polina Gagarina who was next to fly the Russian flag at Eurovision in 2015, her song received some criticism and she was called a pawn in Russia’s game, but there is no denying that it was very, very good and worthy of the 303 points it received.

Polina came 2nd, but was visibly upset during the voting when she was constantly booed as Russia received any of the top points. Presenters Alice Tumler & Mirijam Weichselbraun had a tough time during the voting as Russia went into the lead and this did not go down well in the hall. Alice spoke from the stage during the voting saying  “Our motto is ‘Building Bridges’, and music should stand over politics tonight.” Green room host, and previous years winner Conchita Wurst spoke to Polina during the voting and urged to audience to give her support and stating that she deserved to be in the lead. In many interviews Conchita has been very vocal about how she thinks that booing the Russian contestants in 2014 & 2015 is against the spirit of Eurovision and she considers it very rude and disrespectful.

As a result of this conversation Polina received much criticism because she spoke with and she held hands with Conchita during the segment. Russia, of course, had been very outspoken about Conchita’s win the previous year with politicians demanding to boycott the contest purely based on Conchita’s being there, Russian politician Vladimir Zhirinovsky even said “Fifty years ago the Soviet army occupied Austria. We made a mistake in freeing Austria. We should have stayed.”

So with a 2nd place in 2012 & 2015 and high placing in recent years is it time for Russia’s second win at Eurovision and what would that mean for the contest? In a Russia where flying rainbow flags is illegal and displaying even a hint of being gay can get you beaten up, what happens if Sergey wins? Many fans are saying they would boycott out of protest for the spiralling of LGBTIQ & Human rights in Russia, others are saying they would be afraid to go in case they were targeted by homophobic Russian police, others are saying the would be sure to attend as a sign of not allowing the Russian politics to overshadow the contest and others saying they would go because it would probably be easier to get tickets (!) 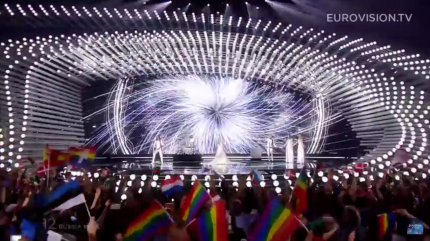 We want to know what you think? If Sergey wins and next years contest then held in Russia, would you go? How would you feel about it? What would be your reason for your decision?