IRELAND – So after the International excitement of Nicky Byrne being officially announced as Ireland’s representative at Eurovision 2016, we thought it best to get some initial reviews from several writers.

It’s hard to judge a song on a recording without seeing it live and fully stage produced but here are some thoughts.

Well! What a way to start this morning! Within the first 30 seconds of listening, I knew this was a song that would have no trouble pulling in votes from around Europe! ‘Sunlight’ is a solid Euro-pop song that has great modern sound to it. I know it’s far too early to call, but I honestly see this as a contender for 2016’s winner. The only other song I had that reaction to was ‘Euphoria’!!! (Hopefully that’s a good omen!) Bravo Ireland! This is sure to qualify for the final in Stockholm and wherever it places on the scoreboard, we’ll be certain to hear it on radios across the continent all summer! SCORE 10 POINTS

Sun <pause> light is not a bad little song. It’s a tad catchy and at the same time seems very familiar in a Scandinavian sort of way. It also seems geared to catch the Måns Zelmerlöw fan-vote but might be a year too late. I did also notice that when we move from the second chorus to the bridge, a key change seems in the offing. But it doesn’t happen, which might keep some of the Schlagerfans on their toes. It should make the top 10 in its semi-final, but I don’t think it’s a winner. And it will need an effective stage show to get it over the line. But no animations of stick men with umbrellas. SCORE 8 POINTS

Emma comes to us courtesy of her American Radio Show and Website ‘Meanwhile In Europe’. Check it out as it is a great show – SEE HERE

I’m afraid ‘Sunlight’ doesn’t do much for me. Even when I was a pre-teen obsessed with Westlife, I was aware of the fact that Nicky was never the stand out singer and I’m not sure how he’ll fare with this live. ‘Sunlight’ isn’t offensive by any means – I could imagine it as a deep cut from a Bon Jovi album in the early 2000s, perhaps. I don’t see Nicky setting the scoreboard alight with votes for this, but if we see a barrage of ballads as we did in Vienna it might stand out for its cheeriness. SCORE 5 POINTS

We welcome Richard to the Eurovision Ireland team. Expect to be seeing a lot more of his words of wisdom – well words 😉 – on the site.

Ireland have done well in selecting a well-known singer that is current, unlike the UK who selected well-known singers after their chart success years beforehand. Nicky Byrne is going to Stockholm with a great pop number that should see, if staged correctly, Ireland return to the left hand side of the scoreboard on the Saturday night. SCORE 8 POINTS

I have only listened to the song once quite deliberately so I can gauge my true feeling. My first impression is good without being overwhelming. It is a good pop song without having a huge oomph factor to it. The song seems to suit his voice and I would consider it to have a good chance of progressing to the Final without even taking anything else (production, staging etc) into consideration. The song has potential to go further with the right staging. SCORE 7 POINTS

We welcome Lisa to the Eurovision Ireland team. You may have read some of her resent articles so stay tuned for more.

It’s worth pointing out that when Westlife were at the height of their fame in the early 00’s I was actually living 3000 miles away in the USA so apart from being aware of them existing, that’s kind of it for me! So, as for the song ‘Sunlight’, well yes I do quite like it. It’s an upbeat, good quality pop song and I have to say that I think it’s by far Ireland’s best shot for a number of years now, but will it win? – Honestly, I don’t think so, sorry. It’s no ‘Euphoria’; it doesn’t challenge or push boundaries, it’s very safe, lyrically it’s a bit simple, and I do worry that this is Ireland attempting to ‘do a Måns’. But before I get lynched by all the Westlife fans out there (and possibly half of Ireland), I will say again I do really like this song and see no reason why Ireland won’t get into the final this year. Oh and Nicky is very easy on the eye, so that will definitely help! SCORE 8 POINTS

Being Irish and in this winter weather we are not used to ‘Sunlight’, but I will throw on my factor 50 sun screen and take my chances happily with Nicky Byrne representing Ireland in Stockholm. The first thing that comes to mind for me is that we have a seasoned professional who will sell this song on the giant stage in the Globen Arena. He will not be phased by this as he has performed there with Westlife. He will understand and know how to sing to the camera as opposed to the arena. All I ask is that we are not subjected to sitting in a stool and standing up on the key change but I am sure that won’t happen 😉

Well the jury members are asked to score the songs on the composition, lyrics and ability for the song to be a commercial hit. This is a very radio friendly song and you can hear the One Direction influence coming through which is always a good thing – unless you are Zayn Malik. The lyrics are strong and can either be taken on face value or go deeper if you want. The songs composition is strong with light and shade. I do think that the song is calling out for that big key change to give it the ‘moment’ and ‘money shot’ on the stage in Stockholm.

When you have 3 minutes on stage you need to stand out and I think this has the potential to do just that. I haven’t seen this much interest in an Irish entry since Jedward and ‘Lipstick’ . Even the BBC and SVT were covering the news of Byrne’s selection today and you cannot buy that advertisement and publicity. The eyes are firmly on Nicky now so it is in his hands to give the performance that he knows he can on that big stage. One is very excited and looks forward to the stage performance of this song. Nicky doesn’t get a 12 points from me as I want him to work his oh so cute backside off between now and May to make this a top class live production. SCORE 10 POINTS 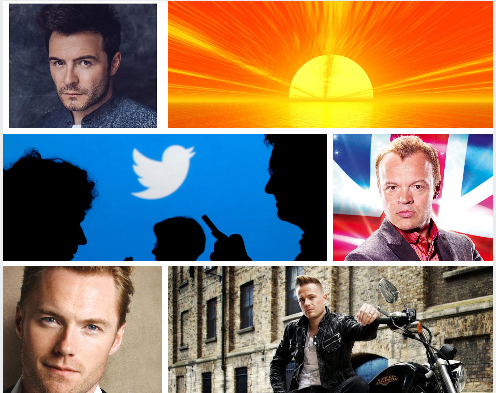 So that gives ‘Sunlight’ 53 out of 7 jury members. If that were countries in a Eurovision Semi Final then Nicky and Ireland would be well on their way to qualifying and deep into the Top 10 on the scoreboard in the final.

That’s some initial thoughts. We will get to see Nicky perform ‘Sunlight’ on the Ray Darcy Saturday night show on February 13th so stay tuned to get a feel for the song live.

So do you agree with our reviews of ‘Sunlight’? Do you think Nicky can qualify for the Grand Final? Could he even win the contest?