The National final will be on February 27th where they had almost 1,000 entries submitted.

So now we will find out and hear the 10 finalists songs live on-line on January 19th from the NRK studios.

So it got us thinking of who we would like to see announced as finalists for Melodi Grand Prix 2016?

You may not know the name but you will know the voice. Aurora Aksnes was the voice behind the massively successful John Lewis tv Christmas advert in 2015. She is just 19 years old and hails from Norway. I bet you didn’t know that! Signed to Decca/Universal Music she has been releasing material for several years now in Norway. She can claim to have a fan in Katy Perry who tweeted of Aurora 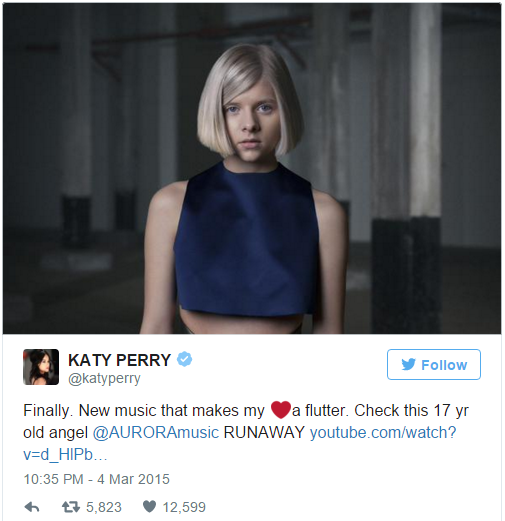 Time to bring back a returning champion we think! 2013 saw the electro/pop Goddess that was Margret Berger who wanted make sure we were well fed, so she insisted that ‘I Feed You My Love’. She was poised for International success and then where did she vanish to? We had glimpses here and there but I never got my huge follow-up smash single. So I think it only right she comes back to Sweden and see if she can score better than 4th place this time and wear another 50 Shades of Grey inspired dress!

Röyksopp is a name that you should know by now! They are an electronic music duo formed in 1998 in Tromsø, Norway and currently based in Bergen, Norway. The band consists of Torbjørn Brundtland and Svein Berge, both being songwriters, producers and remixers. They usually rely on the use of other vocalists for their songs and occasionally they perform the vocal parts. They have been both critically acclaimed and internationally successful so if I was at NRK I would be bribing them with pickled herring all day every day! We want Röyksopp at MGP!

Love them or loath them there is no escaping then. Ylvis is a Norwegian comedy duo consisting of brothers Vegard and Bård Ylvisåker. They are currently the hosts of the Norwegian talk show I kveld med Ylvis (Tonight with Ylvis). Their song and music video “The Fox (What Does the Fox Say?)”, written and filmed for the talk show, went viral on YouTube in September 2013, with over 566 million views as of December 2015. Ok – their performance at Melodifestivalen was a tad strange but they have a strong repertoire (love that word) that could see them come up with another ‘The Fox’ and get 566 million views and votes at Eurovision.

Kaizers Orchestra is a Norwegian alternative rock group. Owing to their energetic live concerts and critically praised recordings, they are among the most popular and acclaimed musical acts in Norway. They have also gained international praise and are a rare commodity where they are among the first Norwegian artists (outside the genre of black metal) to gain international recognition and popularity while singing in their native language. We’re all for national languages being used at Eurovision. Check this masterpiece out from them. Are you listening to us NRK?

2009 was an amazing selection year for Melodi Grand Prix that had at least 4 Eurovision winning songs in the national selection. Alexander Rybak went on to Moscow and blew the competition away. There was however a female quartet that had so much attitude and funk about them that they could even turn this guy to the dark side (if you know what I mean). I don’t care if the band Velvet have split, I want to see a re-union and I want to see them back at Melodi Grand Prix for some more ‘Tricky’ funky action!

Bernhoft (alternatively known as Bern/hoft) is the stage name of Norwegian singer-songwriter Jarle Bernhoft. Splitting from the band Span in 2005 he embarked on a solo career. Bernhoft music is soul, funk and pop inspired. In 2011, he released the album ‘Solidarity Breaks‘ and made the #1 spot on the Norwegian album charts. He has performed at Glastonbury to rave reviews. A safe and funky pair of hands NRK!

So there you have a few of our pics both old and new that would certainly give Norway a wide and varied choice at MGP2016.

What do you think of our choices? Do you agree with us? Who would you like to see announced on January 19th by NRK?