NORWAY : Our thoughts on how Mørland and Debrah Scarlett should stage their Eurovision Entry ‘A monster like me’ 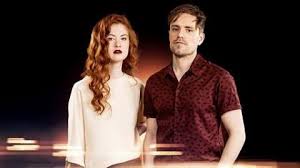 NORWAY : Our thoughts on how Mørland and Debrah Scarlett should stage their Eurovision Entry ‘A monster like me’

So here are some more first thoughts on ‘How Should They Stage their song at Eurovision 2015’?

Norway has gone for something big this year. Not content with winning a few years ago, they’re seriously trying again to get us to spend huge amounts of money on everyday living in their efficient country. I for one have mixed emotions about this song. On the one hand, I would like to see it do well, or even win. On the other, my bank manager might have to put his foot down and stop me from heading a contest in Oslo, Bergen or Lillehammer in 2016. It will do well, maybe not picking up too many 12s and 10s, but I can see it getting lots of 8s, 7s, and 6s.

To remind you, here‘s the Eurovision Ireland live blog from the Norsk Melodi Grand Prix back in March.

So how do you showcase a classy, but extremely dark, song like this? Well a dark song needs a dark staging, a bit like MGP. The song for MGP also appeared to use one camera for the whole performance, that moved around during the various parts of the song. Imagine the two-minute steadicam segment from the Common Linnets’ song and you get the idea. MGP also used an extensive live orchestra – obviously gone for the contest – but this will need the best and biggest orchestral sound that the playback can give.

I see Mr Mørland kicking off on a dark stage, with him in close-up but looking a little bit tortured – after all, in telling his ladylove about his past he’s dropping his guard. He could either be looking directly at the camera, or looking at Debrah who will be behind the camera. The camera then pans around to Debrah for her to do the same. When they start singing together, the camera moves back so they’re both in shot, singing to each other. Not quite in the stand-a-foot-apart-and-shout manner, but definitely looking at each other and not the audience. In MGP they ended the song singing back-to-back. I think instead there should be something that leaves you undecided whether they actually want to make eye contact with each other or not. Again, because Mørland is saying something he finds  a little bit uncomfortable. This song doesn’t need any backing singers, at least visible ones. It needs to be close and intimate.

They need to be dressed very elegantly, like the preview video. Maybe Mørland’s bow tie could be undone and draped around his neck, as if they’ve been out for the evening, got home, started to relax and then he’s decided to tell her the secret that’s been bugging him all evening. Debrah needs to be in a kickass evening frock.

The staging, as I’ve mentioned, needs to be dark. However, perhaps once our duo are singing together we could get something a little more black-and-white. It’s a tough one to call as it needs to retain a bit of ambiguity as to whether their relationship will weather this ‘awful truth’.

But what do you think?