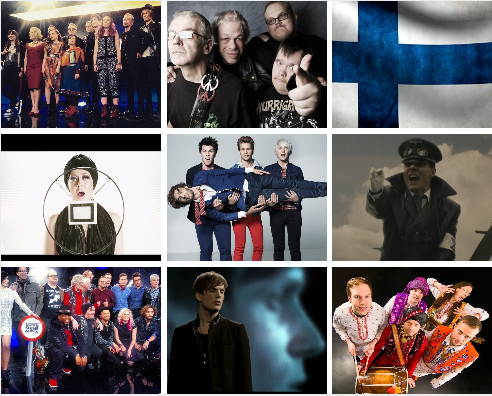 The semi finals are complete and it is time for Finland to vote in the Grand Final of UMK. A hotly contested National Final that you can follow with is here on the capable (one grins) hands of Andrew

You just need to refresh the page after each song to hear Andrew’s thoughts on the songs and see as he tries to predict the winner UMK.

The result will be decided by a 90% televote and 10% Jury vote – This will be interesting and somewhat strange but hey it’s Finland!

So the Final in Finland begins and we are introduced to the finalists in performance order. There is much excitement in the studio that’s for sure, the Finns are up for it tonight. Jon Ola Sand is in the audience and they go to him to say hello.

Andrew’s Comments : Bollywood comes to Finland and how it comes. Catchy and colourful I find my hips swinging to this the instant it starts. It gets more and more frantic and frenetic and having a gaily colourful camper van on the stage is a first. A great start to the show and a stand out performance indeed.

Andrew’s Comments : One of the favourites for tonight on in the dreaded 2nd spot. This is a great sounding contemporary pop song from a good group. This would fit in nicely at Eurovision. We get pyros towards the end and this is actually a better stand out performance that we saw in the Semi Final. In with a good shout here.

Andrew’s Comments : I bit of ethnicity comes to the Final as Solju is accompanied by a female Sami singer. Afraid Solju sounds very out of tune tonight perhaps due to nerves. Its overall a pleasant enough sounding song but on tonight’s performance it is going nowhere I am afraid.

Andrew’s Comments : Another group inspired pop song. A great electronic beat and extremely easy to the ear. The lead singer is also easy to the eye. Very catchy and its slower verses compliment the faster paced chorus. This is something that I would also love to see in Eurovision. has it got a chance, well it was a good performance both visually and vocally. Let us wait and see.

Andrew’s Comments : This song is very r and b meet reggae and sung perfectly well. Its hip and in with the gang and will score well with those that like this genre and some younger kids. But not enough I fear to win the day. However it is a good song of its kind and performed well. It would bomb at Eurovision.

Andrew’s Comments : So many different styles in the Final this year. Now we have moved to Electro-pop Opera and this is quite a song indeed. It gets a bit lost in the middle for me but you cannot fault the amazing vocal performance. The electro beat when it kicks in is great too and this is different enough to stand out for me. Will it win though? There is some stiff competition already.

Andrew’s Comments : Jouni sings another contemporary pop song which sounds better in the chorus to me. It goes a bit slow in the verses but has a good build to it as it progresses. In the scheme of things it would be a welcome addition to Eurovision but not sure it has enough to beat some of the other good songs in this competition tonight.

Andrew’s Comments : One of the most talked about NF entry in the whole of Europe and the shortest. These 4 guys have learning difficulties and the song is a punk rock inspired number. I can see why people would vote for this but its not the best song in the Final by far and would be somewhat patronising to vote this to Eurovision because of the artists disabilities. However I fear that is what could happen here. personally I hope not and a credible 2nd or 3rd is fine for me.

Angelo de Nile – All For Victory

Andrew’s Comments : This is a Meatloaf inspired pop rock song which is all about the performance as well as the vocal. Very strong all over and a running theme of Roman centurions all through it. Has to be seen to be believed really but a very strong song to finish the show, has a chance as well I think.

So there you have it a really good final with lots of variety for sure , so now I have to consider my predictions.

First off I will call a top 5 in no particular order.

PKN because of the novelty rather than the song itself.

Järjestyshäiriö with another good pop song which deserves to do well.

Angelo for a good strong song.

Finally I would choose Opera Skaala for its complete mix of genres which seems bonkers but works well.

Overall I fear PKN will win but would be happy with any of the others mentioned with Satin Circus as my personal pick to go to Vienna.

Solju wins the first 12 points from the juries.

PKN win the 2nd set of 12 points and take the lead.

Satin Circus get the 3rd 12 points and take the lead PKN got zero.

Satin Circus get the 4th 12 points.

Opera Skaala get the 5th 12 points.

Satin Circus get 6th 12 points and have a decent lead.

PKN get no points again and Satin Circus get 12, looking good for them now.

Satin Circus get the next 12 points too. Opera Skaala are 2nd.

The televote will close very shortly as we get the last run through.

PKN win the televote by some distance to satin Circus 2nd and will go to Vienna for Finland.

Disappointed but not in the slightest bit surprised.