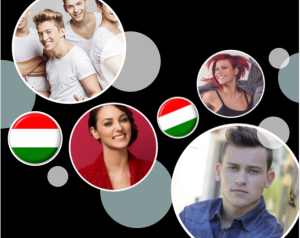 It’s that time of the week when Phil (our #FAB guest writer from the great site On Europe)  takes his Harry Potter wand in hand and tries to predict who will qualify in A-Dal. This time it is serious as we are at the Semi Final Stages and those who qualify tonight make the Grand Final.

The show begins at 20:25 (CET)  and you can watch LIVE on the official A-Dal Website HERE. The Top 3 Jury elections will progress to the Grand Final along with the Top Public voted act.

You just need to refresh the page after each song to hear Phil’s thoughts on the songs and if he thinks they can progress to the Grand Final.

Tonight we give Phil the challenge to describe each act as a Hairstyle! GAME ON! 🙂

Good Evening everyone and welcome  to the Crown Braid of Eurovision blogs!! – They have kicked off in Hungary with a quick look back at the Quarterfinals – and I am sure we will “bob” our way into tonight’s nine songs shortly…

Timi Antal – Woke up this way

So it appears that Antal Timi ( as they call her) is starting the contest this evening.   I still think that this song starts off very weakly indeed and the redhead with the silly haircut ( no description needed here), is singing very out of tune with her backing singers and is almost shouting her song at me.  It’s almost a baby rock song, by that I mean it’s trying so hard to be a grown up fully fledged song, it’s wide of the mark.  The vocal also don’t help.   I don’t think this will get much further in this contest, but lets see what the mentalist in the Jury think.  Well I made a DA of that, 39 points……..

This song sounds so very familiar in both how its composed and how it sung, and that is by no means a bad thing – just a thing I guess.  It’s very modern and staged very simply with everyone on stage so far away from each other that they are all separate entites.  If anything, the song repeats the same phrase “The time is now” just that 2 or 3 times too many.   Very very modern and the juries should like this song but it ends very abruptly for me.  36 points.  Probably not enough.

As big as a beehive, Vera comes on stage in her black dress and BELTS this song out, shaking the rafters and, as Wogan would say, she has a grand pair of lungs on her.  Likened to a James Bond theme ( Skyfall being the closest), again familiarity is not a bad thing with this song and she does look like Adele with her hair and red lips.  The song, though, suffers to my ears from being in Hungarian. Put it in English and it would be massive.  I think the Jury are, however, liking this one…. but no semi naked male dancers?! – Sadface, and double sad face at 32 points.  thats ruined this one’s chances.

Zoltán Mujahid – Beside you

For me, the first of tonight’s genuine contenders.  Mujahid sings this song really well but is still styled och consulted by President Putin as he is still in a Red Army uniform.  The song itself it strong and innofensive and just performed by him facing front and singing the song.  I do think, however, there is something missing and it could be the choreography here but, on song along, this is a danger to that 39 points that the leader currently has.   43 points.  That should see him through.

It’s taken 5 songs but the talent quota has shot up with Spoon.  Hairwise? The boyband equivalent of Spikey cut hair, clean, fresh cut, but with a hint of retro.  A bit like their song to be honest.  4 young uns in their Mr Grey suits, singing a song that would be equally at home in the 70’s, 80’s and today.  However, it has a bit of a “Firelight” vibe behind it that makes you sway and smile and everyone loves cute boys and guitars and suits don’t they?!? Yes they do, 41 points should be plenty good enough ( edit, but it doesn’t seem to be!)

Ádám Szabó – Give me your love

Inconsiderate of SVT for doing the MF results at the same time!  http://www.oneurope.biz got my attention!! (subliminal advertising??) – anyhoo back to this.  He sounded impassioned like he did in his QF but a pleading heart and song does not a qualifier make, not in the strength of this company.  I think this might be the weakest of the last three songs but the jury should love him through.  He’s wearing a quiff…. how apt… as a massive 47 points stick out in the air like a sore thumb.  It may not have the impact of the last 2, but the public love that and it should be straight through.

In almost a reference to 50 shades, “panktastic” are next up.   This is really the anti song in this contest.  There is just your lead singer and lots of acoustic playing, including proper woodwind and the song could have stepped out of the Miskolc Hilton lift lobby – are they the Hungarian equivalent of Max from Germany a few years ago? – Decent enough at lounge music, but not progressing? – I feel this might connect with the jury however…. but it needs a massive 47 to stop Adam being the first through to the final. 34 only and that qualifies Adam.

Boggie – Wars for nothing

A very slow and heart rending performance of a song that should melt the hearts of many people.  It’s almost as good as it was last week and has the same backing screen with all the things we fight against slowly going through the screen.  If you can have a good old fashioned protest song, this’ll be it.  Needs 43 points to qualify.  Considerably higher than last week though, but should make it I believe. And who on the jury is describing this as Fado, eeeerm… no ( nearly swore, remembered who I was writing for hehe).  47 points, and rightly so, gets this one through.

They need 43 points to qualify and, before they even start, that’s a score that’s like a French Plat.. Very complicated indeed…    I can’t see this song getting that many points to be honest.  It is, as I have already described one song, a very weak rock song which is earnest and, if beefed up somewhat, would have been better but  it took the televote to get it through last week, I don’t think its even going to get that this week to be honest.  33 points ( including another 4 point score) – Not enough.

And now… a break for the Televoting.  ONE more to get through….

Boggie – Wars for nothing (Q)

Ádám Szabó – Give me your love (Q)

Zoltán Mujahid – Beside you (Q)

…. That’ll be another full house thank you very much mr Webmaster 😉

Source : Eurovision Ireland and On Europe