Tonight Switzerland selected their song for Eurovision 2015 – Mélanie René – ‘Time To Shine’. The star guest at the show was Conchita Wurst.

Conchita gave a resounding performance of her winning Eurovision song ‘Rise Like A Phoenix’. The audience gave the star a standing ovation with cheers of “Conchita We Love You” ringing out. 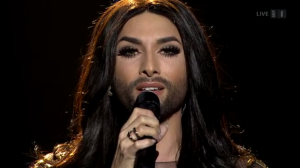 In the brief interview with the host after Conchita’s performance, she confirmed that indeed her new song will be released in March – remember that we told you about that yesterday – and she also confirmed that her new album will be released in May just in time for Eurovision, where she will be one of the shows hosts – on Green Room duty. “That is the plan” she told the host.

What can we expect from Conchita’s new album? What would you like to hear her sing? Can she continue her success? You tell us.