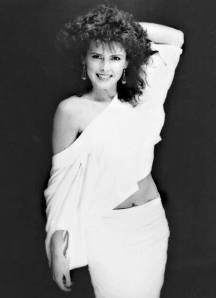 Exclusive – Maria Christian is planning a Eurovision comeback and it starts now.

Maria Christian brought Ireland to 6th place at the Eurovision song contest in 1985 when she was the opening act in Gothenburg – Sweeden. Her song ‘Wait Until The Weekend Comes’ is a firm favourite on the Eurovision circuit and was composed my Brendan Graham. He is the man who composed 2 Irish Eurovision winners – ‘Rock-n-Roll Kids’ (1994) and ‘The Voice’ (1996) and also the Josh Groban and Westlife hit song ‘You Raise Me Up’.

Well Maria has been in contact with Eurovision Ireland to tell us the wonderful news that she is back recording music and is planning on a Eurovision comeback.

Maria (from Dundalk) has raised 7 children in France and now is back to her other passion in life – Her Music. Maria is now 95% blind but says that it is not going to deter her from reaching her goal and returning to the contest that brought her to our attention.

Maria took to the studio this week and recorded this live version of the Donna Summer & Barbra Streisand classic ‘No More Tears’ and can we just say that she sounds and looks #AMAZING!

Some of Maria’s children are following in her musical footpath, her son Emmanuel is a concert pianist and attended the prestigious Conservatory of Paris.

French TV are also interested in Maria and she is in discussions with them on several upcoming projects.

Maria is determined to return to Eurovision for Ireland and she is getting her “social media groove on” as we say. You MUST like her Official Facebook Page HERE and her Official YouTube Channel HERE. Follow Maria’s YouTube Channel as she will be posting regular music videos on there.

The open selection in Ireland for Eurovision 2015 has sparked a whole new interest in the contest with the public, composers and performers. Long may it last!