Friday Favourites here at Eurovision Ireland. This week we want to talk about something that we like to ‘beat a lot’. Get your minds out of the gutter as we are talking about the beloved DRUM and more importantly how it is a firm favourite at the Eurovision song contest.

If you are from Iceland to Azerbaijan or Norway to Israel then you will have had a drum feature at some stage during your history of Eurovision. So what are the drums that have stolen my heartbeat or deafened the living daylights out of my ears to the point that I need to go to Specsavers and get a hearing aid along with new spectacles? Yes spectacles as glasses are what you drink from!

In recent years drums have taken over the stage at Eurovision and one thing that I have noticed is that it is an instrument that is not ageist at all. In fact it is also an equal opportunist and many women of all ages, shapes and forms have beaten the ‘bejaysus’ out of the good old-fashioned drum. Well I think they are more mature women (or have they just got a different dress sense than me and have they just had a hard few early years). Who can tell these days?

I feel like Nicki Minaj at the MTV Awards – “Bursting out of my dress” with excitement about where to start my tour of Eurovision Drums. 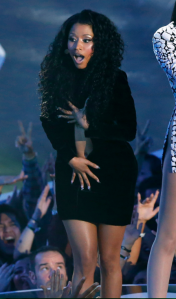 It has to be Moldova from 2005 and the Super Gran from Zdob şi Zdub who performed the Drumtastic ‘Boonika bate doba’ which means ‘Grandmama Beats The Drum’. I mean come on! That is a winning title and a green light for a drum machine of a babe to take to the stage. Grandmama got up off her rocking chair during the performance and let me tell you she put those Russian Grannies from 2012 to shame! While the Buranovskiye Babushki were adorable they really only held each other up and pretended to make some bread. Let me tell you – I was in Baku and I am known for being able to sniff out CARBS within a ten-mile radius and there weren’t any on that stage with the Grannies – Ah ha Girlfriend!!

However I digress. My Moldovan Grandmama leapt out of her chair faster than a Kardashian getting in front of a camera for a photo opportunity! Grandmama got her groove on and beat that drum harder than Solange Knowles hitting Jay-Z in an elevator! If Grandmama can use a drum like that then I think Grandad is one lucky man if you know what I mean. Truly amazing!

Where to next? Well you know what really impresses me is if you can multitask. Now when I say multitasking I don’t mean Brad and Angelina juggling their 500 children, careers and a secret wedding – I mean being able to sing, dance, play the drums and do animal impersonations at the same time while on the stage at Eurovision in front of a couple of hundred million viewers. That is real multitasking – ya hear me Branjelina. You really believe that Angelina and Brad change diapers! That is what the hired help is for!

Again I am wondering with my mind and mouth here. Back to singing, dancing, playing the drums and animal impersonations. You know people say that Ireland had a Turkey on stage in 2008 well Bulgaria had a sheep in 2007. You remember Elitsa & Stoyan who performed at Eurovision in 2007 with the song ‘Water’. Well for 2 people on stage they made one hell of a bang at Eurovision. It was like the ‘Brady Bunch’ where Elitsa brought her family of 4 drums and Stoyan brought his 5 drum litter to the stage. All I can say is that they are lucky that 3 drums equal only 1 person in Eurovision Mathematics as they would have been in trouble of breaching the Eurovision rule of 6 people on stage at once.

However the sounds that Elitsa was able to make were more impressive than Paris Hilton in a home video. Forget that ‘I Feel Like Chicken Tonight’ because those sheep impressions with her voice were so mind-boggling they get me reaching for the mint sauce with the thoughts of Lamb for dinner every time! Little Bo Peep lost her sheep to Elitsa for sure! You know when songwriters are trying to come up with a winning tune for Eurovision you just have to think what the conversation was like when ‘Water, was being written? It probably went like this – “The song is missing something? I know, let’s add a second drum…..9 drums later and we are still missing something. I know – Animal sounds! What animal? Let’s start with animals beginning with the letter A – Antelope(too slow), B – Bear (too scary) and so on and so on F – Fox (Well what does the Fox say? – and we still don’t know despite the efforts of Norwegian dance duo Ylis) and then them came to S – SHEEP. Perfect! That’s it. We’ll appeal to drummers and farmers! Guys I think we have a winning song! And you know what it was a belter of a song and Bulgaria’s best result to date at Eurovision!

Skip to 2013 and you need a sexy drum beat. You know the type of beat. One that gets you in the mood for a good hard banging. One that gets you wanting to take your clothes off faster than Orlando Bloom taking a swipe at Justin Bieber – on behalf of the WORLD! One that gets you wetter than an #ALSIceBucketChallenge. I can think of nothing more satisfying – besides those darn CARBS again – than a bit of topless leather trousered Irish drummers and 2013 gave us not 1, not 2 but 3 of these fine pieces of Irish Beef with Ryan Dolan and his team for ‘Only Love Survives’.

Never mind the price of oil increasing because of conflict in the Middle East – the amount of oil that had to be flown into Copenhagen to get the Irish team into their skin-tight leathers and to then make them shine brighter than a tanned member of The Only Way Is Essex – well that caused a GLOBAL oil shortage. President Obama was so prepared to declare all out war on our Irish drummers for their oil usage. Having said that I think Europe would have defended the Irish Drummers as they had the Malmo arena hoping like mad leprechauns as the lads strutted their stuff on stage. It is like one of those life mysteries like “How does Miley Cyrus have a career as a singer?” when the Irish Drum Maestro came last in the Grand Final. Really did people not hear the Spanish vocals – but sorry guys. However we are left with the fond memories and the ‘Malmo Oil Slick’ across the Baltic Sea – and I don’t necessarily mean ‘Only Teardrops’ however……

There are so many classic 80’s Eurovision drum moments that I really could talk about for hours but I will save them for another banging. Hmmmmm – On second thoughts maybe Miley Cyrus is not that bad as she is still on her ‘Bangerz Tour’ but knowing her that means something totally different – like the notes she thinks she sings are in tune!

What are some of your favourite drumming moments from Eurovision?