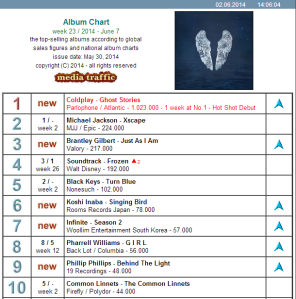 The Common Linnets may have come second at Eurovision 2014 and missing Waylon, but that does not stop them from scoring big in the World Album Charts.

Ilse DeLange and Waylon may not be The Common Linnets that we saw at Eurovision 2014, but they are still holding strong this week in the World Album Charts at #10. In the first week they entered the chart at #5 with their self titled album and this week they still see themselves in the Top 10.

They are certainly holding their own against albums from Coldplay, Michael Jackson and Afrojack. The Band – with Jake Etheridge stepping into Walylon’s shoes – are gigging across Europe and even did a secret show in Vienna – where they couldn’t help but smile through their Eurovision ballad ‘Calm After The Storm’.

With success beckoning the Common Linnets just how far can this Eurovision project go?