EXCLUSIVE : Video Footage Partying With the Eurovision Finalists in The Green Room 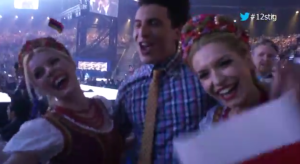 What happened in the Green room at the last night’s Jury Voting dress rehearsal for the Grand Final of Eurovision 2014? Well I could tell you but instead I will show you!

During Denmark’s performance of “Cliche Love Song”, our good friends from #12Stig  were partying with Pollapönk (Iceland), Twin Twin (France), Donatan and Cleo (Poland) and Sanna Nielsen (Sweden) in the Green Room. It seems as if they are all loving Basim. Are we staying in Denmark for a second year?

We love how Twin Twin were being boys and following the girls around.

A piece of gossip for you but the Blue member of Pollapönk dislocated his jaw when they were announced on Tuesday night’s Semi Final. His band mates didn’t realise and all jumped on him. Paramedics were called in immediately and he has had his jaw reset and is soldiering on with singing while on medication. Come on people that is worth a tele vote tonight!