IRELAND : Can-Linn and Kasey Take To The Eurovision Stage For Their First Rehearsal 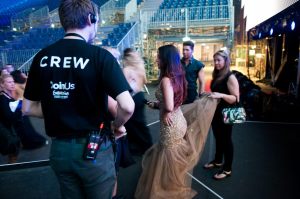 Ireland are but a “Heartbeat” away from the final of Eurovision as they take to the stage today for their first rehearsal. Can-Linn and Kasey arrived last night in advance of today’s show. We also believe that they will be recording a “#JoinUs” song later today for DR tv. Is it a coincidence but 20 years ago today Ireland won Eurovision with “Rock-n-Roll Kids” and “Riverdance” became a global phenomena! Expect some dancing today.

So what of the performance?

There were a lot of pauses between the run through of the performance which makes you think there were some technical issues.

The staging is a mixture of gold and amber and a wonderful collage of Celtic and almost Persian motifs. Kasey is in a stunning gold embroidered and laced dress with a split up the centre. There is a collar to the dress that I think could be removed as it looks somewhat constricted and detracts from her decolatage and we are all about the decolatage here.

At the moment the song is being performed to the stadium and not to the camera. This is easily rectified if Kasey stands and sells the song to camera with her eyes and expressions.

The vocals improved throughout the rehearsals – remember people that this is what rehearsals are for. I really want to see Kasey let loose and enjoy herself. She is a stunning looking woman with a great voice so enjoy the time on stage.

For the verses of the song Kasey walks in a circle and for me I think I would like to see her stay in the centre of the stage and use a microphone stand. Why do I say this? Well with the movement of the camera and the dancers it detracts from Kasey’s potential to sell the song to the camera. Great overhead shots of the stage add depth to the visuals.

The two male dancers are in kilts that look better than the national final outfits of black trousers and shirts. They are not so much in the camera shot as they use the vast stage to create a performance element to the song.

I want the team to enjoy themselves. I want Kasey to perform to the camera and to the voting audience at home. I want Ireland to reach the potential the Eurosong performance promised.

Most of all I want them to enjoy the stage, the camera, and their time in the european spotlight.